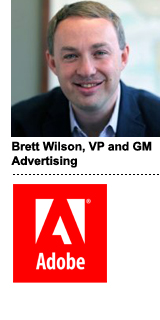 Adobe has rolled out an Advertising Cloud, a merger between its Adobe Media Optimizer products and the acquisition of video DSP TubeMogul, the company revealed Tuesday at the Adobe Summit in Las Vegas.

It will operate now as a standalone cloud adjacent to the larger Marketing Cloud stack, which includes campaign execution, social and A/B testing, and Adobe’s Analytics Cloud, which consists of Adobe Audience Manager and Adobe Analytics.

All three clouds now operate under the Adobe Experience Cloud in a restructuring Adobe claims more accurately reflects its go-to-market strategy with clients across verticals: marketing, advertising and data and analytics.

“We’ve integrated with Marketing Cloud [and Analytics Cloud] such that advertisers who use those platforms can very easily retarget any of their audience segments with a couple of clicks and with very high match rates,” Brett Wilson, former CEO of TubeMogul and new VP and GM of Adobe’s advertising business, told AdExchanger.

“The most important thing we can do is enable advertisers to find a much higher percentage of their audience than we could if our DSP and DMP weren’t integrated,” he added.

That said, Adobe won’t be everything to all marketer clients, such as L’Oreal, which uses Salesforce’s Krux as its DMP, so Wilson said the Adobe Advertising Cloud will remain interoperable with other cloud stacks.

One possible motivation for Adobe segregating its media execution tools is to underscore one of its main differences from rival marketing clouds: DSP ownership.

“Before, they really weren’t that strong in display,” said Karsten Weide, the VP of the media and entertainment practice at research firm IDC. “They had search marketing, but display wasn’t their specialty. They [now] want [to be known as] a vendor of programmatic marketing solutions.”

Adobe also wants to plant its stake in the ground as Google continues to double down on products that straddle the lines between advertising and mar tech, including, for instance, its email and CRM-based Google Customer Match, Weide hypothesized.

“The two main companies we compete with now are Google and The Trade Desk,” Wilson acknowledged.

Although Wilson called Google a big partner to Adobe’s search and display side, TubeMogul had a long-standing beef with Google when it was an independent video DSP.

“With respect to data, think of Google as the Bermuda Triangle where your data goes in and just doesn’t come out,” Wilson said.

He believes eventually, large walled gardens will be forced to open as marketers like P&G (and the UK) lobby for greater accountability and better ad quality from platform partners. In the meantime, Adobe sees itself as a major independent ad tech alternative to platforms like Google and Facebook.

Adobe already has one leg up on competitors: sell-in with big broadcasters via its TV yield optimization tool, Primetime, and TubeMogul’s legacy in programmatic video and more recent foray into programmatic TV, a business which Wilson claims was on a $100 million run rate at the close of last quarter.

“We’ve believed for a long time that because most advertisers still spend 50% of their budgets or more on television, if you want to be the one ad platform that rules them all, you have to anchor around television,” Wilson said.

With TubeMogul, Adobe has a better chance of attracting much larger brand advertising clients, predicts Scott Denne, an analyst at 451 Research.

“Media Optimizer used to be an upsell to existing Adobe Analytics customers,” he noted. “The profile of a marketer that would turn to its website analytics vendor for a DSP or paid search platform is very different from the media buyer that puts TV at the center of its media plan.”

On one hand, it will be challenging for Adobe to serve both sets of customers with the same Advertising Cloud.

But TubeMogul had a characteristically better bidder than Media Optimizer, Denne said, and TubeMogul’s inroad to brand advertisers will provide opportunities to sell Audience Manager, the DMP, more broadly into brands.

Adobe “has traded a market with minimal growth prospects – paid search and display – for TV, a much larger addressable market that is in the earliest stages of shifting to software,” he added.