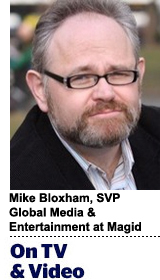 "On TV and Video" is a column exploring opportunities and challenges in advanced TV and video.

The streaming landscape has been defined by access to libraries of content and consumers’ ability to watch their shows of choice on their terms – when and where they want and with or without ads.

Now, with the entrance of Disney Plus and Apple TV Plus and soon-to-be-released services from NBCUniversal (owned by Comcast) and WarnerMedia (owned by AT&T), the streaming market has entered its next phase: Streaming 2.0.

This brave (or scary) new world of streaming can be defined as content plus, where services are marketed as offering something more than content alone. The Disney Plus deal with Verizon, where some Verizon subscribers can receive a free year of the service, is as good of an example as any, and we can expect many more such offers that tie subscriptions to offscreen benefits.

This type of promotional marketing goes straight to the heart of tackling what I like to think of as the unholy trinity of streaming media: curation, cost and churn.

None of these factors are entirely new, but with an ever-increasing array of options available to consumers, they are likely to become more challenging to deal with. Historically, churn has been approached in a relatively unsophisticated manner with the basic goal being to keep as many people subscribing as possible. But this blanket approach fails to acknowledge that there will always be a section of the subscriber base that is predisposed to churn.

The key for any service is to understand how large that group is, what motivates them to churn and – critically – what entices them to return. With that knowledge, it becomes possible to embrace the reality of their behavior and to minimize the negative impact by marketing to them in a manner that is likely to increase the number that return to the service and lessens their time away.

Offers that automatically renew subscriptions at a preferential rate three weeks before the return of a favorite show would engage the behavior and bring greater certainty to revenue projections for those dropping the service once they viewed key shows. Structuring offers to reward those returning after shorter periods away from the service would also be a way to engage those who churn. And in this scenario, loyalty among those who do not churn at all would be rewarded most highly, which in turn raises the prospect of loyalty programs for streaming services. However, at this current time, that is a more distant prospect, but not implausible.

Of course, the central goal will remain focused on keeping people year-round, and in light of this, the three-year (for $140.97) membership promotion for Disney Plus begins to look like the smartest move I’ve seen in the space to address churn. Having users guaranteed for three years is gold dust in the streaming world, and you can be sure others will follow suit.

So as new streamers continue to enter the market, we can expect to see more concerted and sophisticated efforts to not only secure but also to retain subscribers. And the services that succeed in extracting the most value from the churn habit that so many have already adopted will gain the edge from what may be a significant portion of the user base.