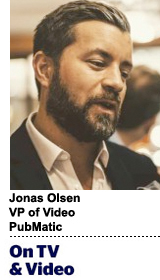 Today’s column is written by Jonas Olsen, vice president of video at PubMatic.

Television isn’t what it was in 2019. There are no live sports, and production of most new shows has halted. Even though TV viewership has surged, much of it is on streaming channels and digital video. A Nielsen report shows that streaming increased 85% from March 2019 to March 2020, with Netflix in the lead.

Already, NBC and CBS have publicly canceled their upfront presentations with many others following. While some will do virtual upfronts, it may not add up to much. In March, eMarketer downgraded its advertising forecast for 2020 by $400 million for China alone, and more reductions will surely follow as brands hold back in the current uncertain climate.

As with any difficult situation, new innovations suddenly surge in growth, and this is likely to happen with programmatic over the top (OTT). OTT has typically been bundled with linear ad sales during the upfronts, meaning that most of the transactions throughout the year have already been set in stone. If more brands hold budget for later in the year, more spot buying will take place, which opens the doors for more performance-based media buying to happen on this surging channel.

The beauty of digital media, in addition to its targetability, is its measurability. Clearly, moving from linear to OTT will give buyers expectations of better reporting, but it’s not a given. There are no measurement or attribution standards as there are for linear TV, and measurement in a digital style is difficult because each service is different, with household accounts, differences across devices and different ways of counting impressions, to name a few.

The solutions are far from solid. Take the current Nielsen ratings points that are calculated from panels, which still drives billions of dollars of decisions from buyers. Last year, Nielsen started including OTT in its Total Ad Rating metrics, which also include mobile and video, but it is not comprehensive enough to constitute a standard for OTT, which is in a no man’s land between Nielsen’s panel and their digital ad ratings.

In December, the IAB proposed an OTT Identifier for Advertising measurement framework to help advertisers to measure across devices. It should address inconsistencies with app identifiers and the use of user agents to determine device types. However, that would require all 200-plus OTT providers to implement it.

On the other end of the spectrum are new offerings from digital companies such as Simpli.fi, which recently announced that it can help performance-based brands attribute online conversions to OTT media. This is certainly a nice thing to have, but it leaves out the large middle of brands that aren’t going to transact directly online.

As standards evolve and mature, publishers are already expecting OTT growth to be much higher than linear growth. Winterberry Group reports that linear will see low single-digit increases compared to more than 30% for OTT. However, the way OTT has been bought and sold has followed linear traditions, which doesn’t take advantage of the optimization available on programmatic. That process could shift substantially now that so much advertiser budget is going to be freed from linear.

Publishers should think about how to package their OTT inventory in a way that will attract buyers and facilitate the needs for advertisers to hit their KPIs as best as possible. NBCU is already testing unified OTT sales, which will allow media buyers to transact on OTT inventory in a programmatic way similar to header bidding. They are packaging this with its One Platform offering that allows for automated sales across channels.

The packaging of inventory could be informed by a combination of linear and digital guidelines. It’s likely that some local broadcast will be purchased “linear-first” with some connection to GRPs for some time, for example, while more nimble “digital-first” OTT inventory will be bought with audience targeting in mind. It’s even possible that some hybrid forms of media transcend digital and linear habits to take advantage of nuances that exist only in OTT environments, such as something based on streaming data.

Publishers must also keep in mind that buyers will be working to overcome differences across multiple platforms for attribution and performance measurement, and so putting out feelers to understand what metrics matter most can help publishers structure their own OTT reporting to align with advertiser needs. The best way to account for these variables is to future-proof through flexible design – don’t commit too much to a single methodology, and prepare for open integration and many different types of transacting, delivering and reporting.

Publishers will not have much time to figure out solutions to these problems if they want to have first-mover advantage. Money will start flowing in as soon as consumers are back on the move and advertisers start spending more. It will be important to package inventory and measurement sooner rather than later so that brands see OTT publishers early in their planning.

What will matter most is that publishers are flexible in early agreements with advertisers to meet their measurement needs. Learning during the process is better than waiting to perfect an offering and being too late to capture the first wave of advertiser dollars because advertisers are also figuring out what they want. It’s better to forge partnerships and innovate together than to be left to play catch-up and have to follow someone else’s path.