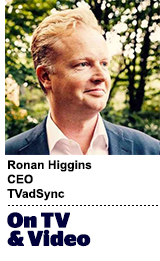 The addressable TV advertising sector is poised for growth. New initiatives and smart TV technologies offer the potential to unlock the “other 14 minutes” of TV ad airtime.

However, every time an addressable linear TV ad is delivered it overwrites a TV ad that was broadcast in the original transmission and likely paid for by an advertiser. If addressable TV advertising is to tap into the national ad inventory, there needs to be a makegood for linear TV advertisers who experience the overwrite. And yet, little has been done about this until recently.

Addressable TV currently accounts for less than 4% of total TV ad spending. Some estimate addressable TV ad spend to grow from $2 billion in 2019 to $10 billion in 2024 – on the back of increased inventory supply and household reach. But that may be stymied by a lack of new standards, measurement and makegood rules.

How the overwrite problem manifests

Recent advances in automatic content recognition (ACR) technology built into smart televisions has enabled the measurement of TV ad exposure on a household level. ACR data can potentially reveal when a household was exposed to an ad that was not broadcast in the original transmission.

This offers the possibility of measuring the rate of dynamic ad insertion or addressable TV overwrites of linear TV ads. While there will be challenges in differentiating between a local affiliate ad insertion, a local cable ad insertion and addressable TV ad overwrites, with machine learning and second-by-second TV viewing data for nearly 20 million ACR households, it is possible for the industry to separate signal from noise.

Solving the overwrite measurement problem is fundamental to the speed at which national addressable TV ad inventory can be unlocked. The industry needs to know that the measurement of linear TV ads is verifiably true. Broadcasters need to be able to report and make good on addressable overwrites. Advertisers need to believe them.

The UK Broadcasters’ Audience Research Board (BARB) was the first TV ratings agency to measure DAI. It has measured Sky AdSmart since 2013 and started measuring Virgin Media (United Kingdom) addressable TV ads in July 2019. Even though BARB only reports the commercial impacts for dynamically served ads at an aggregate level, it has found that 1.5% of Sky television ads were overwritten. If these were all paid-for commercials, it represents roughly 20 million pounds ($26 million) of airtime. That may not sound like a lot, but if this level of overwrite were similar in the US market, it would be equivalent to $1 billion of linear TV ad overwrites.

In the United States, Nielsen has been working to upgrade the Nielsen currency and reconcile addressable TV advertising with the $70 billion of linear TV ad investment per year.

If Nielsen is going to enable national broadcasters to sell addressable linear advertising, they must also be able to report or make good those addressable overwrites to their linear TV buyers. It’s not clear if Nielsen will use the TV panel or its ACR division, Gracenote, to deliver a reconciliation solution.

TV network and media agency stakeholders have formed an Advanced TV Measurement Task Force to deliver a solution that everyone in the industry can rally behind, with stopgap measures emerging.

Early trials of smart TV DAI are focused on single advertiser spot optimization (SASO), which means addressable TV ads will only overwrite linear TV ads purchased by the same advertiser. If Ford Motor Company wants to run an addressable TV campaign, it would only be able to do it on top of their own linear TV ads.

However, a recent Sky AdSmart whitepaper found that 75% of addressable UK TV advertisers have never advertised on linear TV. That leaves a lot of money on the table if SASO becomes the standard.

Finally, there is the challenge of measuring addressable collision, when a smart TV DAI ad overwrites a set-top box addressable TV ad. Cable, satellite and smart TV DAI systems would need to communicate to ensure that broadcasters don’t sell the same impression twice.

As the TV industry embraces addressable TV advertising at scale, robust reconciliation is going to be necessary to ensure that the billions of dollars that flow through linear TV ads continue in confidence. The methodology must be credible to buyers and sellers, and it must be scalable across media-buying partners so that standards can emerge to simplify the process.