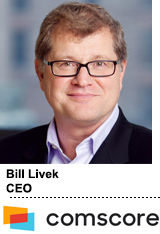 “It’s not easy communicating that all of the bad stuff that happened in the past is, well, in the past,” said Livek, who took over as chief exec in early November from interim CEO Dale Fuller.

Livek helmed Rentrak for nearly seven years before its merger with Comscore in 2016. That was also the year life started to get complicated at Comscore.

The company replaced its CEO and CFO in 2016 amid an investigation into its accounting practices. Nasdaq briefly delisted it in 2017 after it failed to conduct an SEC-mandated audit on time. CEO Bryan Wiener and president Sarah Hofstetter resigned on the same day in late March citing “irreconcilable differences,” less than a year after joining Comscore.

Livek wants to relegate that unfortunate timeline to the history books and focus on profitability and product development.

“The major cost of all the things that happened over the last few years is in the rearview mirror now,” he said. “When we look at our prospects, it’s about what we can do in cross-channel measurement.”

AdExchanger: What’s the plan for a return to profitability, and what are the most promising investment areas for Comscore in the year to come?

BILL LIVEK: Dale [Fuller] did a lot of the heavy lifting by rightsizing our cost structure and putting in discipline. We’re in a good place in terms of getting back to profitability, and then we’ll be able to invest.

We look at the market broadly. TV networks think about cross-platform in a way that’s particular to them. The local media folks look at it through their lens in terms of their local competition. And movie studios have their own perspective and needs, like thinking beyond the theater to how movies will play direct to consumer. You don’t have to look far to see the reinvention of the media business happening everywhere. Our focus is on helping our customers move cross-platform.

Who is your biggest competitor today, beyond Nielsen?

I don’t worry about all of the people who want to compete with us. What I worry about is making sure that we innovate fast enough so we can stay ahead of the curve. We’ve done it in the past, and it’s hard to do without the assets we have, like our opt-in video and internet panels that we combine with census profiles and our other television products. It’s good to have in this privacy-focused world.

Is there such a thing as one single TV-style currency anymore, considering media is so fragmented?

The idea of a single currency died a long time ago, it just hasn’t been buried yet. We live in a world where there’s a basket of currencies. The same is true in adjacent markets, like the consumer credit space, which has three major currencies: Equifax, Experian and TransUnion. That marketplace functions well, and the banking system relies on them to decide if people are creditworthy. There can be an equivalent in media.

Broadcasters and publishers are moving more and more of their content online. What steps are you taking to develop cross-channel audience ratings to accommodate them?

Being able to do that is in our DNA. It was only about a dozen years ago that video on demand started needing measurement on a census-wide basis, and we were the first company to take server logs from cable companies for video on demand to help with that. It was only an emerging business back then, and we pulled these server logs from literally thousands and thousands of headends, aggregated them and cleansed the data so TV networks could understand what people were watching via on-demand platforms and whether those people were in New York City or Iowa.

New media going direct to consumer is just an advancement of a basic discipline we already have.

What is the one thing the market seems to misunderstand or get wrong about Comscore?

We live with the sins of the past, and we move forward. Comscore had a hiccup, but Comscore is also the result of many great companies with lots of great people that were acquired and merged. We’ve got unique products and unique customers that rely on us to trade advertising in all sectors. That’s what I hope people realize about us.

You recently bought $1 million in Comscore stock. Why?

I don’t know how I can convince our customers and our employees about the future unless I put my own hard-earned money after tax dollars into this company. It’s a pledge to them about how far I think Comscore can go and proof that I think we’re a sound investment.

Still, it’s been a tumultuous few years for Comscore. What’s the mood among employees?

It’s good, because people are focused on the future. The marketplace is developing right in front of us. Many of the products we’ll see in the market soon have yet to even be developed, and that’s exciting.