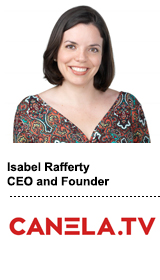 Canela enters the streaming market alongside major media companies, such as NBCUniversal and WarnerMedia, and as advertisers pull back spend in the wake of COVID-19.

But the team had been working toward a May 19, 2020, launch for almost two years. “Nobody saw COVID coming, but we decided to keep going,” said CEO Isabel Rafferty.

While Canela is well aware of the streaming competition, it has carved out a large, underserved niche: young, bilingual, second- and third-generation Hispanics. Latinos are the country’s fastest-growing consumer market, poised to hit $1.5 trillion in spending power this year, according to the Selig Center for Economic Growth.

“[Other streaming services] are all fighting for the same audience,” Rafferty said. “What we found is a very substantial mass of people that nobody is focusing their attention on.”

Univision and Telemundo have dominated programming for Latino audiences, but their shows are exclusively in Spanish, are produced mostly in Mexico and reach older audiences through cable. There’s a lack of quality, long-form content for younger Latinos, which make up a quarter of the US population under 18, according to Nielsen.

“We don’t put all Hispanics in one bucket and call it a day,” Rafferty said. “We understand Hispanics are diverse, and our goal is to segment that audience accurately.”

With movies and TV shows from markets across LATAM and Spain, Canela TV gives viewers the option to watch both content and ads in English or Spanish. The app is available on all streaming platforms, mobile iOS and Android.

Despite a large and underserved audience, Canela TV enters a market where ad spend is down dramatically.

The service’s launch sponsor paused its commitment due to COVID-19-related shutdowns, Rafferty said. QSRs and large retailers – typically big multicultural spenders – have mostly delayed their investments. And telecoms and CPGs are either pausing or continuing to spend.

Many brands see multicultural marketing budgets as nice to have in a crisis, despite its fast growth and potential.

“Multicultural is considered a luxury for many brands,” Rafferty said. “If they’re going to cut budgets, that’s one of the categories they go after first.”

Canela Media, however, has relationships with advertisers through its digital properties, and it offers brands a full-funnel sales approach across digital, OTT and influencer marketing, as well as creative services. Buyers can access the entire network directly or programmatically.

“We have positioned this as a one-stop solution, and that’s been working for us,” Rafferty said.

As advertisers calculate reentering the market, Canela TV is focusing on customer acquisition, hoping to gain more viewers at a faster pace while acquisition costs are down through social media buys and tune-in ads on streaming platforms.

“We’re taking this opportunity to concentrate on what we can control,” Rafferty said. “Ad dollars will come.”