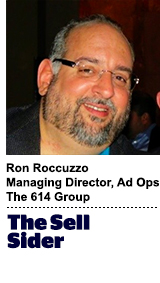 Today’s column is written by Ron Roccuzzo, managing director of ad operations at The 614 Group.

Weighing whether to outsource a publisher’s ad-operations needs is an important decision that should never be taken lightly. There are many factors to consider, but at the top of that list should be the continued satisfaction of clients.

Can a publisher outsource some or all of its ad-ops needs and have it run as seamless as if the team were in-house?

When it comes to outsourcing most companies end up using a solution that is 100% either onshore or offshore. What is the difference between onshore and offshore?

Onshore ad-ops solutions would have all of the personnel working on that account in the same country as the company. In our case we are referring to the United States, though personnel in Canada would work as well.

Offshore ad-ops solutions would have all the personnel located in a country outside of that company’s country. In the scenarios we are referring to in this article, that would be any personnel outside of the U.S. and Canada. In most cases we are looking at teams that are in India.

There are pros and cons for using 100% onshore or offshore support. In my opinion, the best way to outsource is to find the right combo of both onshore and offshore personnel.

It is important for an outsourced team to have real-world experience having worked for, at some point, a large publisher or agency. A large percentage of those working at onshore ad-ops companies have these types of companies on their résumé. While they may have the most real-world experience in the office, the expertise and knowledge of those working offshore should not be discounted.

Publishers get high-quality personnel with the higher price, but with a balanced approach they can get both high quality and volume. If they balance it properly they can cover more work at a reduced expense.

With an onshore-offshore combo, publishers can get 24-hour coverage. The onshore team can handle urgent items that publishers want done before the end of the day while the offshore team can work on future campaign setups and adjustments and build reports that are waiting in the publisher’s inbox the next morning.

When publishers use an onshore-offshore solution, they can deal with one or two contacts onshore who are in turn responsible for managing and dealing with the offshore personnel. That communication responsibility is best placed in the outsourced teams’ hands instead of the publisher’s in-house team having to communicate across multiple time zones and not getting timely responses.

With the right onshore-offshore balance, publishers can have the onshore team focus on tasks that include client communication if they so require it. The onshore team will know how to talk to clients about setup needs and optimization requests as many of them have owned that relationship and responsibility at previous companies. Offshore teams may have experience talking to the client but, due to the time zone differences, their knowledge of dealing with the US clients may be problematic.

Having the offshore team working overnight frees up the onshore team to assist the sales and account management teams to ensure clients are happy with their campaign results.

Not all companies have the ability to offer a combination of onshore and offshore ad-ops support, which can make a publisher’s search more difficult. Other companies may have the capabilities but do not execute well due to poor internal communication and high turnover rates.

That’s why it is important to have an outsourced team with experienced personnel who have not only worked in a large variety of ad-ops situations but also have dealt with offshore ad-ops teams and know how to manage the overall workflow efficiently and effectively.

At the end of the day, publishers want to make sure they have the best coverage for their business to ensure happy clients and an in-house staff that is comfortable with the outsourced team.

The gains of the onshore-offshore balance gives publishers that peace of mind by offering high-quality experience, top-notch communication, more coverage and reduced costs.