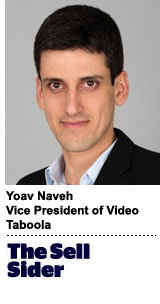 Today’s column is written by Yoav Naveh, vice president of video at Taboola.

The concept of online advertising has long been associated with the standard banner ad – the square unit that consumers breeze past as they scroll down a page.

That’s changing rapidly, though, as video viewership grows and introduces more opportunities for engaging video ads. As a result, video ad spending is predicted to grow by 12% this year while traditional banner spending shrinks, according to JP Morgan.

Publishers have long relied on display as their primary revenue source. As a result, many of the publisher-focused technology solutions have addressed display ad selling. But video isn’t sold or served in the exact same way as display advertising, which means that established tactics aren’t necessarily transferable.

For instance, when publishers try to optimize toward the highest CPM with video, as they do with display, they run the risk of inconsistent fill rates and long load times. Rather than trying to mimic display strategies, publishers need to look for a strategy that leads to the same desired outcome, rather than a direct technological equivalent. In video, that means optimizing toward overall ad revenue rather than CPMs.

Video advertising is far more technologically intense than display. VPAID tags can take 10 seconds or more to fire and actually load an ad, and some ad calls time out, resulting in no actual payment to the publisher. With all this heavy lifting, publishers want to maximize the chances they’ll get paid for every potential video impression. As a result, many are loading up on video ad networks to get the highest CPMs possible.

Unfortunately, this focus on CPM has a downside. Adding more networks means adding more tags, which means even longer load times. To make matters worse, the entity that wins a video ad auction may not always pay for the impression. This may be attributable to technological errors at times, but a delinquent buyer is most likely rooted in video’s archaic arbitrage practice, where even prominent supply-side platforms own seats on demand-side platforms and bid for impressions.

These attempts to buy up inventory and resell it for a higher fee have created a mess of a consumer experience and set up a very dangerous house of cards for publishers. A buyer trying to resell an impression can push the load time toward 20 seconds or more. These excruciatingly long load times lead to user abandonment, which can cause traffic to crater, thereby bringing fewer ad impressions and ultimately resulting in no business at all for the publisher. Maxing out on ad networks in an attempt to optimize for CPMs in this way is not optimizing for revenue, especially if it has the potential to destroy revenue and the online user experience altogether.

What are publishers to do if they want to maximize return in the increasingly competitive video market? Rather than optimize impressions around the highest CPM, publishers need to take the longer view toward revenue, which is part and parcel with understanding fill rates and load time.

The first step is shifting the focus toward revenue per thousand page views, or RPM, rather than the CPMs from auctions. Simple A/B testing should provide a clearer understanding of this metric. Publishers may find a new partner can generate $20,000 RPM, which is great. But if that source is potentially taking $25,000 away from another bidder, then that’s a net loss of $5,000 per thousand page views. Getting the highest CPM for each impression might provide a real-time rush for the publisher, but careful analysis needs to be done to ensure that a quick thrill won’t negatively impact long-term revenue success.

Beyond RPM analysis, publishers also must examine load times, the number of ad calls and the amount of data downloaded to serve an ad. Too many tags can also damage a page, so it’s important for publishers to limit the number of tags fired to two or maybe three per page. If it is going to take 10 seconds to load an ad, that ad must sell.

The dual benefit here is that optimizing for revenue in this fashion goes hand in hand with a positive consumer experience. Arbitrage almost always results in slow load times and potentially leads to unfilled impressions, neither of which are going to have a positive effect on publisher revenue. When the optimization process deprioritizes the bad apples attempting to arbitrage, publishers will be rewarded with fast load times, resulting in higher sell rates and lower page abandonment.