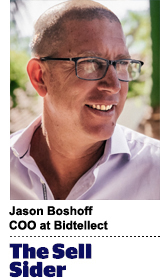 "The Sell Sider” is a column written for the sell side of the digital media community.

If an advertiser’s primary objective is to hit a numeric KPI or a first- or third-party audience to achieve one, does it make sense to pay two to four times as much in a private marketplace (PMP) than what it would cost for the same exact impression in the open exchange?

PMPs do offer some advantages to brand advertisers, and they have seen a recent resurgence. But often they are simply not worth the time and effort.

One case in which a PMP would likely prove its worth would be if an endemic audience of a site, or group of sites, lends itself to the advertiser category, and there is a high advertiser demand for that audience. It would make sense for the advertiser to negotiate a deal directly with the publisher or supply-side platform (SSP) because it could secure a fixed premium rate and guarantee preferred or a first look at that inventory.

SSPs are the most innovative in the digital ecosystem for engaging new units. In many cases, new and innovative units lack scale and require custom setups to make them available. This is another example of when PMPs make sense: SSPs can isolate that supply pool to ensure all parties have an accurate perception of what is available and can ensure the execution is flawless.

When PMPs are a performance burden

The amount of work required to set up a PMP is a burden on the entire operation. Jay Friedman, the president and partner of Goodway Group, wrote a great piece last year about the amount of unnecessary human work and subsequent errors associated with using PMPs, not to mention a much higher price tag.

• A client feels that brand safety would be better preserved by selecting a PMP. The brand is comfortable only with a certain site list, and a PMP guarantees the limited, quality inventory pool that it has chosen. But accessing inventory only on the PMP, at a higher price than across the open ecosystem, negatively affects performance and buying power. A buy-side white list would solve this issue and eliminate the need for multiple sell-side deals.

• Bundled PMPs sold by SSPs often benefit the seller more than the buyer. SSPs do not have access to all the inventory, domains or creative units available across the publisher or group of publishers within the PMP deal. For example, if the goal is viewability and the campaign has a first- or third-party audience and is restricted by location, the opportunity to hit the KPI would be severely constrained. A better option would be to create a white list with a demand-side platform to access the inventory across endless SSPs with greater scale and better performance.

For certain purposes, a PMP can be a great addition to an advertisers’ programmatic wheelhouse. But trying to make it a one-size-fits-all tool gives it far more credit than it deserves, not to mention its strain on time and resources.

It may make sense for advertisers to rethink the benefits of a PMP before deciding if the juice is worth the squeeze, and remember the power of demand in the open exchange.