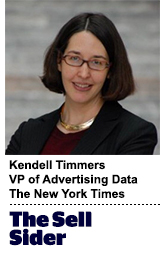 I recently looked myself up on BlueKai’s registry tool to see what audiences I belong to within their third-party data sets. While some of the results were correct (Hello, two kids and a mortgage!), many were contradictory or wrong.

In addition to being a young man, I’m apparently both a homeowner and a renter, I belong to four separate household income brackets (including the lowest and the highest), and I am both the female and male head of household.

I’m not picking on BlueKai in particular ­– it should be applauded for making it comparatively easy for me to see how I’m classified. The point is that any advertiser looking to zero in on young, unencumbered men is also going to mistakenly find me.

The accuracy of third-party data is overrated, and we have passed the point of diminishing returns on further modeling. Third-party segments can, over time, approximate an audience that might be more interested in an advertisement, but it is not a truth set, and there are limits to how targeted marketers can get.

Although I’ve seen many talented data scientists attempt to use third-party audience figures to create sophisticated targeting models, I have not witnessed much success. What I’ve seen has been based more on cookie or ID activity – such as the number or recency of audiences – rather than the supposed characteristics of the person on the other side of the screen.

The details are only going to get murkier and privacy questions will become thornier as consumers shift to mobile, despite the promise of online-offline matching services and universal IDs. A universal ID, after all, is just another way to connect two separate sets of dubious audience characteristics, through a link that itself is sometimes wrong. Not only is the data only mildly accurate, but the advertising industry’s continued use of it could motivate a very valid backlash from consumers concerned about their privacy.

Publishers need to find new, nonexploitative ways to connect advertisers to potential customers. In the pursuit of “relevant” ads, we might jeopardize the ability of advertising to meaningfully fund a business.

Enter context. Back before data management platforms and cookies came to dominate the landscape, simple context indicators were the primary form of targeting. Buying advertising based on a domain whitelist is a form of contextual targeting, as is targeting by sections of a newspaper or website. As the myth of behavioral audiences grew (“Find the right people, wherever they are online”), innovation in context declined and, for the most part, it remains a fairly blunt tool today.

The next wave of targeting innovation has already started, with machine learning allowing publishers to create extremely granular and data-driven classifications of their content, organized by custom topic clusters, virality and even emotional tone. These targeting methods are blind to the reader’s characteristics and focus entirely on the connection between the advertisement and the surrounding article.

Rather than an accumulation of unreliably interpreted signals, context is based on what the person is looking at and thinking about right now, which, for many advertisers, is far more relevant. A focus on minute classification of content could be the key to publisher survival in a post-GDPR (and CCPA, and whatever other acts are coming down the pike) landscape.

It’s a win-win-win: Publishers regain control of the segmentation and classification of their impressions and cut out costly middlemen peddling questionable data. Consumers get a privacy-friendly environment where they don’t need to second-guess what they did to prompt a certain ad. And advertisers have safe targeting methods that can often beat conventional behavioral targeting.

Kicking a habit has never been so appealing.