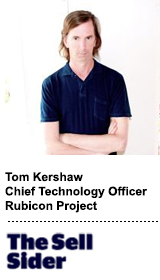 “The Sell Sider” is a column written for the sell side of the digital media community. Today’s column is written by Tom Kershaw, chief technology officer for Rubicon Project.

It’s hardly revolutionary to predict the end of the third-party cookie. Digital advertising’s fundamental currency for the last ten years is under increasing strain. Regulators are enacting restrictions on privacy, and users are opting-out at rising rates. Though Google stopped short of an outright ban of third-party identifiers in Chrome, their days are clearly numbered. With publisher revenues and marketer outcomes on the line, there is still no industry-wide consensus as to what will replace them.

The good news is that the rise of open source and standardization in publisher-facing ad tech may provide a solution, stewarded by industry groups that are well-suited to provide publishers with direct control of their cookie space. Specifically, Prebid.org has cultivated a header bidding standard that enables publishers to govern which standardized IDs are allowed on their pages. (Full disclosure: I’m a Prebid.org board member.) The next step is to allow publishers to administer first-party cookies in the header bidding wrapper and control which IDs are transmitted to which buyers.

But before we get into the potential of Prebid, let’s first look at the four main options for shared identity in a post-cookie world, including Prebid.

Persistent Browser IDs: Most mobile and CTV devices support a single, resettable device identifier that allows basic user modeling and conversion tracking. Persistent browser IDs would apply the same system to the web, creating a single framework for all digital advertising and putting mobile on the same playing field as everything else. Unfortunately, this model is completely dependent on the support of the major browsers, and today none of them do.

Single Sign-On: This method requires users to use a single password system for access to hundreds of sites and apps, giving independent publishers the same advantage as the walled gardens. While a worthwhile endeavor, attempts to entice users to log in to most sites have proven unsuccessful. Getting millions of users to do so – much less 2 billion users – seems nearly impossible.

Contextual Targeting: Leveraging context to reach audiences isn’t novel. Programmatic targeting was contextually-based until audience-based buying eclipsed it. Though this method remains the only way to target users who opt out of all identifiers, monetization rates are as much as 70% lower than those on interest-based targeting. While this gap is narrowing – especially on Safari – it will take a long time to close.

First-Party Cookies: For years publishers have used first-party cookies to tailor content to users’ preferences, among other things. However, the fact that third parties can’t read these cookies led to the proliferation of proprietary IDs (and the resultant backlash) we have today. Moving to a single, standardized identifier that’s owned by the publisher will reduce this clutter, improve the user experience, and avoid turning digital targeting on its head. Though common identifiers such as DigiTrust, The Trade Desk’s OpenID and LiveRamp’s IDL are helping to reduce this proliferation, their effectiveness is certain to diminish because they themselves are based on the third-party model. For this reason, these standard solutions need the anchor of a first-party ID to be viable in the long-term.

For the first-party model to work for everyone, it must first work for publishers, and the latter have been understandably reticent to embrace any solution that requires them to open their domain space to third parties.

Prebid could free them from this requirement, by updating the standard to support first-party cookie and ID management in the header bidding wrapper. This, and leadership by standards bodies such as the IAB, will make the first-party cookie a truly viable way to preserve publisher revenue streams, allow marketers to reach their goals, and provide users with a non-subscription-based option for accessing content.

Toward a community-driven approach

In the future, identity will be a shared community asset instead of something that individual companies use for competitive advantage. More and more publishers are exploring how a combination of first-party IDs and open standards can enable greater monetization without a loss of control – and that’s ultimately good for marketers and end-users as well. In short, the way forward for identity lies in standards, open-source and cooperation.