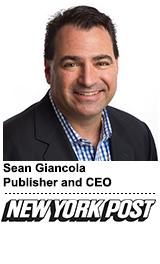 The New York Post promoted Sean Giancola to publisher and CEO in January after Jesse Angelo left the company.

Giancola, who describes his background as “part publishing, part digital,” now oversees a newsroom for the first time. He’s also taking over several existing projects that will launch this year, he said.

Revenue diversification is a key theme: The Post will introduce a digital membership/subscription later this year.

The Post will launch a commerce program to recommends products, similar to The New York Times’ The Wirecutter and New York Magazine’s The Strategist. Page Six, for example, could point readers toward styles they may want to buy.

The New York Post’s journalism will appear in new places, too, including podcasts with the editorial team and more video for YouTube and other properties.

Meanwhile, print advertising is resurging. In August, The Post struck lightning when the Supreme sneaker brand appeared in a Post cover wrap. The advertising sold out its print run as fans snapped up copies of the newspaper.

Giancola spoke to AdExchanger about his plans to expand the Post and diversify revenue.

How does the Post’s DNA affect how you go to market with advertisers?

Any brand you work with, you lean into their strengths. We are opinionated, but that’s part of our DNA. And we are a national brand, but we have the DNA of New York, which carries through in the voice, whether we’re covering entertainment, sports or news. If you are a reader of the Post, you love that voice. We’ve grown because we’ve stayed true to who we are.

Many brands don’t want to put ads on news content. Where do you push back on or accommodate those requests?

I don’t think it’s push-back. News is where the people are. The fastest growing brands in our business are news-related, News Corp. being one of them. [The opportunity] is how you develop products or evangelize your editorial to create opportunities so people will buy news.

Local news is challenged. How do you see those challenges playing out in your business?

I wouldn’t say we’re local; we’re mass regional. When you’re reaching 67 million people on the web, it’s national. Only 10% to 15% of that audience is New York. But there are only 14 million New Yorkers, so we reach one out of two New Yorkers, which is a powerful opportunity for brands, whether it’s banking, entertainment or retail.

The Post’s Supreme cover wrap became a cultural moment and huge advertising victory. Is it repeatable for advertisers? Can lightning strike twice?

A lot of top agency executives saw this and said, “How can we replicate that?” It’s hard to replicate Supreme because the brand is so unique, but how can you take pieces of that success and make it work for your brand? That’s what we were trying to do. Supreme gave us a runway to think differently now about different mediums.

What other creative print advertising have you done since Supreme?

We did a fun thing around models and paparazzi [for an entertainment client]. We gave the impression that the Post was there, and there were models with paparazzi following them. In addition to that, we created custom content. We’ve had a lot of success bridging physical and digital. Social implication of events and experiences is huge.

How is programmatic transforming your business?

We have a very sophisticated tech stack here, and programmatic is a big part of our revenue. When you are scaling at 67 million, you have to understand how you monetize and execute on high volume. We focus on that. We focus on growing our audience, growing our engagement and then growing yield.

Where are you selling programmatic at the News Corp. vs. the Post level?

We launched NewsIQ a little over a year ago, where we have taken inventory, combined it with data at scale and allowed marketers to buy that holistically, with confidence and security, anti-fraud and quality. It’s been successful, and the Post is a big participant.

So there are two sales teams. Is that tricky?

No. We are trying to overcommunicate, and there is no conflict. We are all at News Corp. and want to make sure the marketer is buying what’s right for their business. At certain times, it might just be the Post, at times it will be NewsIQ. We want to be agnostic. You begin by solving whatever the marketer’s problem is, and that’s the way we choose to approach the business.

News Corp. CEO Robert Thomson often takes an anti-Google or anti-Amazon stance in his public remarks. But how does that work in practice, where you have to partner with all these platforms?

We work with the usual suspects, and there are some we want to work even more with, because they are going to be a conduit to evangelize our content at scale.

Who do you want to work more with?

I want to work more with all of them, to be honest. To share one, we’ve been working with YouTube on our channels, and we’re building them up. We’re still in the early stages.

Video is another opportunity we’re growing, [with] custom video series. If you want to scale video and go off platform, you’re going to be on YouTube. We want to grow that. But you want to be thoughtful about how you do it.

How are you thinking about getting consumers to pay for content?

Our main subscription revenue comes from newsstand and home delivery. We are exploring a paid model of subscription/membership that will launch in the second half of this year. It’s too early to say what that looks like.

We are going to build out an ecommerce platform to take advantage of verticals where we know our audiences are looking for more paths to purchase. We’re in the throes of building out a bespoke ecommerce/affiliate team now. We have Page Six Style, Page Six, and a lot of affiliate is service-oriented. There are verticals where we think it makes sense to do it within our swim lanes.

Where do you think the Post is being innovative? Others have tested podcasts, video, commerce and subscriptions before. Has the Post historically not had to invest in digital as much because it had a big print business?

We’d invested in digital well before my four months in this role. What we are doing is looking at our business and investing in places that make sense for our brand. Yes, we are not the first in audio, we’re not the first in video. But for each one of those things, we are going to do it uniquely Post. We’re not going to mimic someone, because it’s not the Post way.

If we launch a podcast, we are going to do something that is innovative and true to our brand. Same thing with video. I don’t know if we’re reinventing the wheel, but once we do something, we want to do it in the moniker of what the Post stands for. We believe we have a differentiated brand, and marketers and audiences want that.