Bud Light first contacted Doing Things Media through a DM on Instagram – a fitting introduction for a partnership that revolves around creating and distributing memes on social media.

Doing Things Media owns and operates 20 popular meme and viral video accounts across Facebook, Instagram, TikTok and YouTube, including @AnimalsDoingThings, @NoChaser, @AllGasNoBrakesShow and @neatdad. It has around 60 million followers.

“Memes are a big part of how people communicate today,” he said. “They’re culturally relevant, highly shareable and very organic.”

After collaborating to make memes from Bud Light’s Super Bowl ad with Post Malone, Doing Things Media is now helping the brand search for a new CMO – chief meme officer, that is. The new position, which Bud Light posted on Instagram in August, will last for three months, pay $5,000 a month and entail creating 10 viral memes with Bud Light’s marketing team to help plug its new line of hard seltzer. Bud Light is currently interviewing candidates.

AdExchanger: What is the origin of Bud Light’s partnership with Doing Things Media?

CONOR MASON: About a year ago, we started noticing that a lot of the accounts under their umbrella were posting content that was very relevant to the brand, some of which was about us and some of which was about light beer culture in general. We always want to lean into the things that people share, engage with, comment on and send to their friends.

Where did the idea for the chief meme officer campaign come from?

MASON: Bud Light has always been a fun brand, with campaigns like Dilly Dilly and Real Men of Genius. We’ve been pushing out memes on our own pages for a while, and the thought was, how can we take this to the next level and promote the new hard seltzer? And so, we’re hiring someone whose sole job is to create and share content that gets people engaging and connecting with the brand. Doing Things Media is helping us get the world out.

TODD ANDERMAN: It’s a very self-aware program. The joke is that Bud Light Seltzer hasn’t created great memes in the past and they’re expressing that fact – and looking for someone to help them – in a meme. 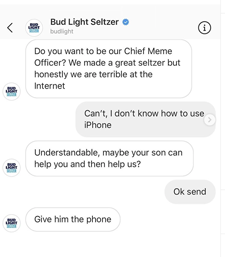 Did you boost any of this content with paid media, or was it all organic?

How do you know whether something will be culturally relevant or go viral?

MASON: It’s about finding the things that people are talking about in the culture, although if a brand is going to participate, it has to make sense. It has to align. The Super Bowl is a great example. That was a big moment for us, and we could insert ourselves into that conversation. But it doesn’t always have to be a specific cultural moment, just something relevant that people are talking about, like the Crispy Boy meme that was popular in the fall of last year.

How do you measure the success of meme marketing?

ANDERMAN: The main KPI is engagement – likes and shares. We have the same creators who create our editorial posts working on our branded content. But we also do brand studies for advertisers to show increases in awareness, message association and purchase intent. All of the traditional metrics apply.

How common is this type of brand partnership for Doing Things Media?

ANDERMAN: It’s a new area and it’s not a natural part of every brand’s digital marketing strategy, but there’s a lot of momentum and we’re working with brand partners in multiple categories. This is a really fast and easy way to do branded content. It’s not like a big video shoot where you need to get a lot of people together on set, which is difficult to do now anyway. Our creators can create this content in their house on their phone.

MASON: We took our time with the Super Bowl campaign. But there are also times where we’ve turned content around in 24 or 48 hours, including brand and legal approval. The benefit of the meme format is that it’s short form and it’s scrappy.

MASON: We’re just trying to get our message out in ways we think are relatable and shareable, whether that’s during the biggest sports events on TV or whether that’s memes on social media. We’re definitely going to have memes be part of our consideration set going forward.

What makes for an ideal brand/publisher partnership?

ANDERMAN: Having a sense of humor. That’s true for inherently fun and funny brands, like Bud Light, as much as it is for brands that aren’t known for that. It’s still possible to find meme-able moments for more serious brands. For example, we worked with a tax company during tax season. Taxes is not an obviously funny category, but we created memes about the funny deductions people take and the frivolous things they spend their money on.

It’s just about finding a way to make something engaging, whatever it is.