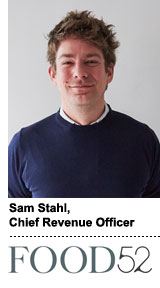 The internet is ravenous for food content, illustrated by the rise of food bloggers, “hands-and-pans” videos, Tastemade and Extra Crispy, a bespoke food publication from Time Inc.

Food52’s strategy isn’t to go broad, as many of its competitors do, but deep. It serves up content for food nerds and obsessives who are hungry for vegan chicken pho or the truth behind turmeric lattes.

Enter Chief Revenue Officer Sam Stahl, who joined Food52 in January. The former Bustle head sales executive, who has worked at College Humor and Playboy and advised publishers like Inverse, Movie Pilot and ManRepeller, is tasked with ramping up Food52’s advertising business.

Ads aren’t the sole revenue stream for the site, which attracts 2.8 million uniques in January, according to comScore, and a broader following of 11 million across its main site and social platforms. Since 2014, two-third of its revenue has come from its ecommerce store. But advertising offers more seductive margins than ecommerce and a largely untapped opportunity – as long as Stahl can sell advertisers on Food52’s smaller but more dedicated audience.

“Scale with audience is great. Scale without audience I don’t think will be valuable forever,” Stahl said, referencing publishers that generate page views but not loyal readers.

Stahl talked to AdExchanger about his vision for Food52 and how he sees other small publishers in the changing media landscape.

AdExchanger: Content and commerce hasn’t always worked out. What’s your take on how Food52 is blending the two?

SAM STAHL: You see media businesses that have a big audience and try to sell them things, and it doesn’t usually work. Companies like Refinery29 have tried it and they usually stop. I’m interested in seeing how these two arms of the business can work together.

We have millions of people going to Food52, many who are buying stuff from us. How can we create a better experience for people and advertisers who want to reach people with our content? I don’t think anyone has cracked that yet. We’re going to figure out how the two different arms of the business can work together.

Is Food52’s ecommerce arm treated as an “advertiser” on the site?

The Food52 shop is a decent-size advertiser on its own. The marketing team has a media budget to spend on people. We have existed as church and state. While there is no competition, we haven’t figured out how to take advantage of each other, so we are going to discover ways we can help each other out.

Where is Food52 in terms of using its customer data?

Every user on Food52 has an engagement score we’ve assigned to them: how many [stories] they have read, saved and shared, how much they are spending in the store. You can infer some of the things we are able to think about, in terms of targeting media. If we have high-value shoppers that are spending a lot with us, maybe we can serve them specific ads.

How are you looking at programmatic?

We can create a private marketplace when appropriate, but direct sales is absolutely going to be our emphasis moving forward. We are not a site with 50 million uniques or 100 million uniques, where programmatic can be a huge, meaningful part of the pie. We are able to garner higher CPMs through things like the big, beautiful ad units we are selling, custom content and video ad units. As we continue to grow the site, that may change. It’s a good thing to have in the back pocket.

A lot of other digital media brands that have recipe data – like AllRecipes and Taste of Home – use those recipes as a bottom-of-funnel moment where brands can insert themselves. Is that something that would be a fit for Food52?

A lot of food sites are very specific in naming the advertiser in the recipe. Where we have seen the most value is bringing the brand to life in the photography, not calling them out in a recipe. If we do something with Cabot cheese, which just did a Super Bowl program with us, it might call for a “sharp cheddar” but have the brand in the hero [main] image.

Industrywide, direct-sold banner ads are in decline. Sponsored content is picking up, but it’s so competitive. How are you seeing the market?

Advertisers are working with fewer publishers for each campaign. Working with as few people as possible makes life easier. The challenge is figuring out your secret sauce as a publisher. Everyone is offering high-impact media and distribution of content. You have to have something that no one else can do because otherwise you will be fighting for the scraps.

The engagement of our audience and being able to offer the data and insights we have assembled over years and years to create campaigns that no one else can create.

You’ve also been an adviser to digital media companies. What gives a small brand a shot at success?

If you have a solid brand with an audience that loves what you do, nothing will be able to take that away, whether it’s programmatic or whether it’s shifting to fewer publishers getting on buys.

There are publishers out there that do a very good job with advertising sales and they have scale, but they don’t have an audience. You’re going to see brands without a real audience either get consolidated or swallowed up by someone else.

Facebook can be a frenemy to publishers. But for smaller publishers, its additional social reach can give them all this extra scale, and that can be a positive thing for sponsored content. How are you looking at that?

Over the past few years, I’ve seen how Facebook can be a great thing and a scary thing. I’ve lived through when Facebook changed an algorithm and all of a sudden, it’s “uh-oh.” Food52’s traffic is more diversified than some of the larger publishers I’ve worked with. We have a 1 million-plus email list and more direct traffic.

Looking at it by a percentage basis, Facebook is not an end-all like it is for some people. I would look at Facebook right now as more of a friend than a frenemy.

You shared some internal metrics that show every $25,000 spent leads to 150,000 engagements. Given that, it seems Food52 would benefit from a shift to cost-per-engagement pricing, similar to what the Financial Times did with cost-per-hour pricing.

That is a fantastic idea, but it’s not there yet. Because agencies aren’t set up to think that way yet and buy that way yet. I think it’s a progressive thing they did, and for a site like Food52 that would be fantastic for us, but you don’t want to sell things people aren’t comfortable buying.

Food52 has raised $9 million to date. Would they raise more money?

This is a very well-run business. We’ve always been methodical about how we reinvest our capital. Everything here is organic, which is pretty rare these days. Meaning that the team has grown naturally over the past eight years into what it’s become today.

I’ve been in hypergrowth businesses, where they spend as much money as quickly as possible to achieve growth and scale. There’s no right way to do it, but there are contrasts in that.

What industry trends do you see hurting small, engagement-rich publishers like yourself?

When there is an obsession with pure scale while not looking at anything else, that does hurt publishers who do have more engaged audiences. Scale is a commodity now. Anyone can get scale. If a publisher wants to have 40 million or 50 million uniques, they can acquire that audience through marketing. It’s audience development.