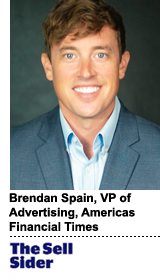 Today’s column is written by Brendan Spain, vice president of advertising for the Americas at the Financial Times.

The subprime mortgage crisis of 2008 came to a head when mortgage-backed securities that had received AAA ratings were jammed with high-risk mortgages. When the market crashed, it nearly took down the entire global economy and introduced us to the concept of quantitative easing and never-ending low interest rates.

More than a decade later, among widespread digital consolidation, the two largest content recommendation companies merged. Against the backdrop of this merger, which was announced in October, I see a reflection of the mortgage banking environment in late 2007 and 2008.

The similarities between cheap CPMs with worthless impressions and cheap mortgage-backed securities with worthless mortgages are numerous. So the question isn’t whether we are in a subprime media crisis, but what will trigger a correction? Like the bond traders of the 2000s, some programmatic buyers have​ propped up long-tail, sometimes authorless websites​, with the edict that context and editorial do not matter as long as the right ad is being shown to the right person.

That tide is changing as client-side marketers become more inquisitive about how and where their budgets are being deployed, with some of the same buyers now extolling the philosophy that there is no such thing as remnant, with all programmatic being premium.

Companies such as ​Bank of America are beginning to swing​ the pendulum back to trusted publishers and contexts as opposed to chasing scale. And while 2019 has been a difficult year for publishing across the board, the consolidation or closing of long-tail sites that depend heavily on sourcing traffic from third parties shows that the subprime content bubble may be popping.

The unchecked incentives to manufacture as much revenue on a page as possible reward the traffic arbitrager for ramming the page full of ads; it’s not uncommon to see four videos and 10 display impressions. Obviously these “impressions” provide little value to an advertiser.

Thanks to digital media’s current fixation on low viewable CPMs and cost per completed views, traffic arbitrage through content recommendation has flourished. This is why many sites in the paid-for, quality content world focus on engagement, return visits and subscriptions, not just impressions or page views as the barometer for success.

The subprime media crisis, like others, will inevitably result in a reckoning

Marketers are starting to see evidence of variability in the value of media and deploying tools that bring transparency to its quality. As information around the quality of media disseminates, prices will drop for lower quality placements. Websites that engage in traffic arbitrage will decrease bids, making the Faustian bargain a little less palatable for publishers that run content recommendation boxes.

The first wave of media sanitization took aim at viewability and brand safety with vendors such as Moat, DoubleVerify and Integral Ad Science building businesses that were optimizing (or attempting to optimize) to these objectives. The next wave of media quality measurement exists with products such as Adelaide, a tool being built to help advertisers quantify the true value of media through the lens of attention. Tools like Adelaide should effectively help media buyers arbitrage an irrationally priced market for attention.

The impact of ​additional transparency as it relates to value ​will likely reverberate through the rest of digital media as advertisers adopt more sophisticated methods of assessing quality. Low quality websites will no longer be able to capture premium spend, compounding losses from the decline of content recommendation.

A focus on value drives economic incentives for high quality media placements, creating demand for publishers with environments that respect their advertisers and audiences, and rewarding the creation of high quality reportage, editing and customer experience.