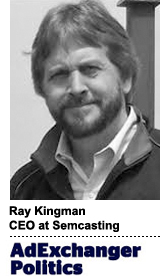 Following every election, political pundits and media professionals look for the killer app that may have made the difference. This year’s post-mortem will doubtless include talk of connected TV, native advertising and even text messaging. But the killer app might just be the mobile-fueled turnout of the historically elusive youth vote.

This larger turnout carried over slightly with 30- to 39-year-olds, which had a 4% increase over 2014 levels, according to exit polling from Catalist.

What accounts for the recent enthusiasm? Issues such as health care, voter suppression, a gun-control campaign that’s increasingly youth-driven and the #MeToo movement certainly contributed. It probably didn’t hurt that our president continues to dismantle the American ideal, 280 characters at a time.

But perhaps the hero of the story is mobile, which has finally come into its own as a campaign tool.

The data on the mobile ad spend is equally telling. Seventy-five percent of the digital advertising spend will take place on mobile in 2018, according to eMarketer.

One of the attractions of mobile is accurate targeting. Because of the limits on unique user reach and the lack of transparency associated with onboarding to desktops and network configurations, mobile offers a crisper onboarding alternative for programmatic marketers. This is especially important in an election year. Programmatic onboarding of the voter file to a digital identifier – in the form of a mobile device – is much closer to the location and IP-matching process that political agencies have used to improve voter reach and transparency.

Politicians and their agencies lose elections when they’re only able to reach 30-40% of possible voters in a district. Traditional cookie-based or social onboarding have a hard time matching to 30% of unique voters in a local district. But an IP address and mobile combination typically delivers 70-80% of unique users with increased transparency. Without mobile, political campaigns can’t do the kind of targeting required by modern digital advertising.

But the interplay between the youth vote and mobile goes a lot deeper than targeting. For one thing, Democrats went big on voter outreach via text this year – a good idea, given the fact that fewer people answer their phones these days. As it turned out, text messaging, along with a blitz of targeted video media, likely made for more engaged and informed voters.

The 18- to 39-year-old voter also voted early, in another sign that voter outreach via mobile had a big impact. In some states, early ballots from the 18-29 age group outnumbered same-day ballots, according to TargetSmart. The increase in early voting by younger voters was 188% over 2014, according to The Atlantic.

Like every election in modern American history, pundits have noted that young people don’t vote in large enough numbers to sway the outcome. And for about a decade, we’ve heard that mobile is ready for prime time. But if you think about it, today’s 29-year-olds have probably used smartphones most of their adult lives.

The machine once used by campaigns to reach voters has become so much more than a phone. Not only did mobile facilitate outreach and canvassing efforts, it became the primary screen for voters to learn about the candidates and the issues, find their polling locations and post selfies with their “I Voted” stickers.

What happened in 2018 may have been a perfect storm of mobile technology and youth culture. Or, put another way, just as mobile became a mature platform, the youth vote may have also grown up.