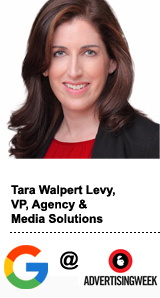 Google is opening up more intent data for targeting on YouTube and expanding its Custom Affinity Audiences offering.

Beyond reaching people based on their searches on YouTube, advertisers will now be able to create segments and target video ads using data derived from Google Maps and apps.

“The ultimate goal is to reach any person regardless of demographics or psychographics,” Tara Walpert Levy, Google’s VP of agency and media solutions, said Monday onstage at Advertising Week in New York City. “Audience plus context plus intention – that is where the magic happens.”

Attention is an increasingly scarce commodity. Relevancy is the best way to capture it, Walpert Levy said, pointing to research from Ipsos that found people are roughly three times more likely to pay attention to online video ads versus the average spot on TV.

That’s because the ads are more likely related to a particular search or need. Layering intent onto demographic data, psychographic data and context leads to real relevance, Walpert Levy said.

Say an apparel brand wants to reach people with information about its new line of winter coats. The brand can target adults 18-49 who have an affinity for skiing and traveling to cold climates, but “fundamentally, you’re still guessing whether those people are interested in winter coats,” Walpert Levy said.

“Intent signals are what help you find those people,” she said.

For that, Google is introducing Director Mix to help brands automatically create multiple ad versions from one piece of source creative. The advertiser or creative agency supplies the video file and Google splices it into multiple variants to serve against different Custom Affinity Audience segments.

“Some folks were so hooked, they went back and watched the original trailer,” Walpert Levy said.

The search lift for the game trailer topped 375%.

With more assets at their disposal, brands can also be more strategic in how they use them with the same audience over time.

Google also announced expanded third-party partnerships with Datalogix and Nielsen to account for the offline sales effects of YouTube ads, including six-second videos.