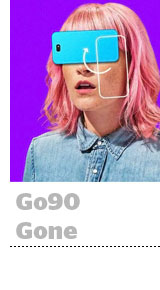 Verizon revealed Tuesday that it is taking a $658 million writedown for “product realignment” that is “mainly related” to Go90, which it shut down in late July.

Verizon also had $339 million in severance charges and $120 million in charges related to its Oath integration, the company said during an earnings call. Taken together, the charges total about $900 million after taxes.

Verizon launched Go90 in September 2015 but couldn’t get viewers to download the app, even after exempting streaming from its data caps. Much of the content on the app didn’t seem to resonate with viewers and suffered from a lack of promotion.

There were signs of trouble. Layoffs in the Go90 division first occurred more than a year ago, and Marni Walden, a Go90 champion who was behind Verizon’s AOL and Yahoo acquisitions, announced her departure in October. Current CEO Lowell McAdam retires Aug. 1.

Verizon apparently sunk $200 million into content for the platform. In comparison, Netflix will spend $8 billion just this year on content. Verizon conceded that it just can’t win in the content creation game.

“We’re not going to be owning content,” McAdam said. Instead, it wants to focus on content distribution.

On the Oath side, integration is on track to finish by the end of the year. Oath’s video DSP integration finished in Q1, and half of the inventory was accessible via its DSP in Q2.

When the Oath integration is complete, Verizon expects all its ad products to be available in one cross-platform, cross-device solution. Verizon hopes that single platform will attract more advertisers and content owners, increasing momentum for Oath.

McAdam told investors that Verizon does not plan to sell Oath.

Revenue for Oath stood at $1.9 billion for the quarter, roughly flat on a sequential basis.

Verizon’s failure to combine telco data, an ad platform and content comes just at AT&T is assembling its own similar combo, with WarnerMedia and AppNexus. Could it suffer the same fate?

The content may be the key difference. Go90 tried to create content and a distribution platform from scratch. Plus, it created content for phones, not living rooms. But AT&T bought WarnerMedia, which already creates content and distributes it in many places, including linear, nonlinear, mobile and desktop.