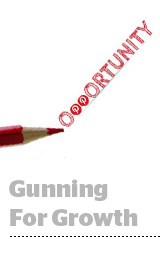 While Pinterest’s stock has been challenged since the company went public in April 2019, it anticipates direct-to-consumer and small and medium-sized businesses will be a huge growth vector.

“The Fortune 500 are great – but, this is the thing, there are only 500 of them,” said Harold Klaje, head of global growth at Pinterest.

Pinterest isn’t alone in this thinking: Google and Facebook count millions of SMBs within their total paid advertiser counts, and both regularly release tools and product features to help smaller advertisers spend more, particularly in service of their performance marketing goals.

Period underwear maker Thinx and The Citizenry, a home decor company based in Dallas, are two such brands. Both have upped their spend on Pinterest in the past year to help with performance-based campaign objectives and as a way to diversify their social spend.

“We need to make sure that we’re not over reliant on any one marketing channel,” said Daniella Amirian, director of growth marketing at Thinx.

“They comprised more than 85% of our total marketing spend,” she said. “If there was ever a Facebook bug or algorithm issue, our revenue would be severely impacted – and that made me really nervous as the person responsible for growth and new user acquisition.”

In 2018, Thinx began shifting more of its spend to Pinterest as a way to encourage down-funnel behavior. Although Pinterest’s value proposition has historically skewed more toward the top of the funnel, Pinterest has invested to expand its commerce-related capabilities.

The Citizenry is also using Pinterest as a channel to find new customers.

The majority of keyword searches on Pinterest – 97% – are unbranded, which means that most of the people doing the searching are still in an open frame of mind. Undecided consumers are attractive to smaller and midsize advertisers and disruptor brands that need to reach new, receptive audiences, but can’t compete against larger brands that have heftier marketing budgets at their disposal.

“It’s an opportunity to engage with pinners while they’re still looking for new ideas, before they know specifically what they want,” said Pinterest’s Klaje.

Over the last year, The Citizenry has evolved its KPIs on Pinterest from brand awareness to bolstering lower-funnel advertising goals.

“Pinterest has a huge home decor following, it's a visual platform and they reach people searching for new ideas, so it’s a natural fit with our brand,” said Erin Ashford, The Citizenry’s acquisition marketing manager. “But beyond that, we’re also able to reach people searching for specific keywords related to imagery, like ‘headboard’ or ‘linen bedding’ or ‘best bedding,’ and that’s worked out pretty well for us.”

In 2019, after moving all of its Pinterest-specific budget to performance-based campaign types, such as conversion optimization, The Citizenry saw its cost per acquisition decrease by 25% in line with an increase in average order value.

“There’s definitely intention there, because people are actively searching and actively planning,” Ashford said. “I’d say that, at least for us, Pinterest is making real strides to become more of a performance platform that can keep pace with Facebook and Instagram.”

But Pinterest has a game plan. Top of the list is prioritizing the SMB opportunity by developing self-serve features designed specifically for smaller advertisers, including a free e-learning tool called Pinterest Academy and a mobile version of the Pinterest Ads Manager.

In early February, Ben Silbermann noted on a call with investors that although SMBs don’t make up a large proportion of Pinterest’s revenue today, they’ll serve as a nexus for future growth as those businesses mature and look to diversify their spend on social channels.

There’s an addressable market of midsize advertisers that are “very sophisticated” and “super quantitative in the way they advertise,” but aren’t necessarily scaled enough to have a dedicated account manager, Silbermann said. This is Pinterest’s sweet spot and focus in the year ahead.

“The investment in a lot of the automation in the desktop ads manager is really to support them,” he said.

Pinterest’s inventory is also a relative bargain right now, at least compared with Facebook and Instagram. Total investment in Pinterest rose 30% in 2019, according to Kenshoo’s Q3 trends report, although the average CPM on Pinterest was stable (one might say flat) between April and September 2019 at $2.74.

“It’s often difficult being an SMB and having to compete with larger companies and their larger marketing budgets,” Klaje said. “We’re trying to give them an equal chance to be as successful as the big guys.”