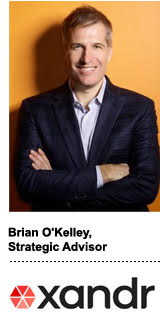 AppNexus co-founder and CEO Brian O’Kelley has stepped down from his operational role and will serve in an advisory capacity at Xandr, the AT&T-owned ad unit that acquired AppNexus in June.

An internal memo, published below in its entirety, Xandr CEO Brian Lesser wrote: “As Brian and I discussed the best path forward, we made the decision together that he would transition out of the daily operations of AppNexus and move into a strategic advisory role for the foreseeable future. He will continue to report to me directly.”

Upon the acquisition of AppNexus, O’Kelley tried to figure out where he fit into the new organization, and has settled on a role where he’s working closely with Lesser on different projects that are being built now and will be announced in a couple of weeks.

Key members of AppNexus senior leadership that once reported to him – including President Michael Rubenstein, CTO Ben John and SVP or Product Ryan Christensen – will now report to Lesser.

The leadership shakeup is part of the effort to integrate AppNexus – and some of the old AdWorks team – fully into Xandr, according to a spokesperson. The spokesperson does not expect any layoffs as a result of the integration.

The full memo from Lesser, which details all of the leadership changes, is reprinted below.

This week, I celebrate my one-year anniversary at AT&T. And I as I reflect on the year, I’m proud of what we have accomplished together. We have grown our leadership position in advanced TV advertising, AppNexus has provided us with the best talent and technology in the business, and finally we have a name – Xandr – that unifies our new organization and has the industry buzzing.

I made a commitment to keep you apprised as we make progress integrating our company and today I have some additional announcements about the expanded leadership team of Xandr and our updated structure.

As our company has expanded globally, I’ve made some intentional steps to grow my direct reporting team to help meet the needs of our customers. Effective immediately, the following executives will now report to me:

Our new senior leadership team will also include the following team members:

They will continue to report to Rick Welday, President, Media Sales and Operations, Xandr Media.

As I shared in August, various corporate functions have started to integrate within Xandr. Updates on these teams are as follows:

Finally, I would like to outline some changes that I recognize will be felt especially throughout the AppNexus organization.

With the integration of the AppNexus People Team, Nithya Das will continue to support the business through the end of this month and then will serve as an advisor to Rick Gomez until the end of the year. Throughout her seven-year tenure at AppNexus, Nithya has served as AppNexus’ General Counsel and most recently as its Chief People and Legal Officer. She was also the executive sponsor for the women’s network and AppNexus Impact—as well as a leader of the company’s diversity and inclusion initiatives. We would like to thank her for of all her contributions and wish her the very best in the future.

In addition, Jonathan Hsu will serve as an advisor to me during this transitionary period. Jon has served as Chief Financial Officer of AppNexus for more than four years and played a vital role in the company’s growth and success. He has also been a mentor of mine throughout my career and I appreciate his on-going support of Xandr.

Lastly, over the past couple of months, Brian O’Kelley has been instrumental in leading AppNexus during this time of transition. He has provided critical insight and I appreciate his leadership. As Brian and I discussed the best path forward, we made the decision together that he would transition out of the daily operations of AppNexus and move into a strategic advisory role for the foreseeable future. He will continue to report to me directly.

Brian started AppNexus more than 11 years ago and has built an incredible company with the best technology and talent. AppNexus is a company that is respected around the globe, not only for the platform and enterprise customer base, but also because of its diverse and inclusive workplace. Brian is a leader’s leader, and I appreciate him setting up a fantastic team at AppNexus that will help lead Xandr to the next level. I am constantly inspired by Brian’s passion and incredible spirit; he will always be an enormous part of our success.

For further information about the changes that we made today, please read our FAQ.

Join me in congratulating all of those that are taking on new responsibilities within Xandr and thanking those that are transitioning to new opportunities. Each of you plays a unique role in how effectively we execute on our purpose – Make Advertising Matter – so let’s make every day count.