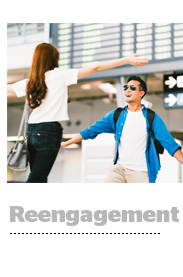 “At the very least, we need to be able to identify users, make sure we’re not selling them the same thing twice,” he said.

For the last year and a half, Kiwi.com has been using a programmatic retargeting solution from mobile monetization platform YouAppi to run reengagement campaigns.

The tool launched Monday after a nearly three-year beta period, in response to advertisers increasingly asking for help with optimizing the post-install user relationship.

YouAppi searches for patterns in in-app event data to divide the app’s user base into active users, inactive users and organic users likely to take action regardless.

Then it targets the cohorts within each bucket with reengagement messages depending on their status. A simple example would be retargeting newly-installed users with a notification to register or watch a tutorial, while a longer-standing user might get messaging focused on increasing gameplay.

The goal is to help developers sustain lifetime value across all stages of the funnel, and to do so with an eye on incrementality and return on ad spend, said Hilit Mioduser Ames, YouAppi’s VP of growth and reengagement.

“Historically, app marketers turned to retargeting periodically in order to win back users that had become dormant or who didn’t convert,” she said. “Retargeting works best alongside user acquisition as part of the customer’s journey.”

But it doesn’t matter how effective retargeting is, if the CPMs are too high.

For Kiwi.com, which handles around 100 million search queries a day, that means never paying more to re-engage and retain a user than it cost to acquire that user in the first place. The pricier it gets to acquire new users, the more important it becomes for growth marketers to turn their mind to retention and reengagement.

It’s an aggressive KPI. Growth marketers often judge their retargeting efforts based on the cost of media rather than the ultimate value of a transaction correlated with the cost of acquisition.

“But we set ambitious targets and have tight budgets at Kiwi.com,” Calzaverini said. “Everything we do has to bring back some sort of ROI-positive performance.”

Kiwi.com focuses its retargeting efforts on users that had already converted and bucketing them further to fund the ones more likely to book and spend more within specific timeframes. In a recent campaign to increase flight bookings, the result was a 37% uptick in purchases at an average ROI of 110%.