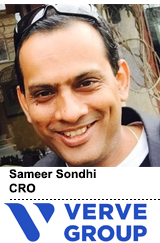 MGI Group, which trades on the Frankfurt stock exchange and a Stockholm-based Nasdaq exchange, updated its financial forecast after the Smaato deal from initial guidance of around $272 million in revenue this year to $288 million, according to an investor presentation on Wednesday.

The mobile advertising market has consolidated and become more competitive over the past year, Sondhi said, so the addition of a large programmatic player represents a bigger opportunity than it would have in the past.

Smaato, a mobile SSP, has integrations with gaming apps and social media companies, and has a global user reach of 1.3 billion, according to the investor presentation. That compares fairly well with MGI’s 1.4 billion user reach, considering MGI operates many games and has the Verve ad tech unit with a preexisting mobile SSP. The company said that its consolidated user reach after the deal will be at least 1.8 billion users.

Given Smaato’s reach and its large pool of supply, MGI and Verve Group made the case to investors that the sticker price is a relative steal compared to mobile ad tech companies on the public market. Smaato’s $170 million value is about 3.5X its total revenue. MGI trades at 4.1X revenue. But mobile ad tech companies like AppLovin and ironSource are valued at 12.7X and 22.5X their annual revenue.

Smaato also brings many new DSP relationships to the Verve Group, Sondhi said. With that, and with Smaato adding Verve Group’s ATOM product – a cookieless identity solution – he said there are great opportunities to increase both businesses’ revenue with “low-hanging fruit” integrations in the short term.

Smaato will continue to run as an independent business, he said, though it will eventually be integrated by components into the Verve Group’s offering.

“Critical mass is so important right now, if you look at the way that consolidations have happened in the industry,” he said. “So we feel that it’s a good move.”