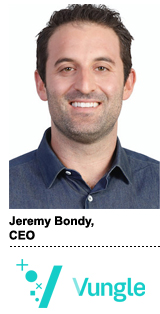 Vungle chief exec Jeremy Bondy refers to himself as a “virtual CEO.”

Bondy was at Vungle for six years, most recently as COO, before being elevated to the top spot in November, seven months into the pandemic.

It’s been a busy few quarters for Vungle, which is evolving from a mobile ad network into a performance marketing platform. Backed by a $750 million investment from private equity firm Blackstone in July 2019, Vungle acquired app performance optimization startup AlgoLift in October followed by gaming analytics provider GameRefinery in March.

And the company is planning to stay acquisitive, said Bondy, who noted that programmatic has grown into a nine-figure business for Vungle.

“It’s hard to imagine that we’re going to have a quiet year, and I wouldn’t want to have it any other way,” he said. “We’re really just getting started.”

AdExchanger: When Blackstone acquired Vungle in 2019, we wrote a story with the headline, “Why is Vungle worth $750 million?” Can I ask you that same question?

JEREMY BONDY: Blackstone got a tremendous bargain with Vungle, and they’ve made a series of smart bets on mobile brands, including mar tech and ad tech, over the past almost 18 months, from [genetics company] Ancestry to [mobile DSP] Liftoff and [social casino games studio] Murka.

The mobile market is massive and gaming is taking a share in entertainment, which is happening in combination with a variety of macro trends and undeniable tailwinds, including ad tech companies doing well in the public market and ironSource and AppLovin looking at IPOs.

Blackstone knew that the optimal scaling thesis for Vungle would be an M&A-driven one and they’re realizing that vision. With GameRefinery and AlgoLift, we become a multiproduct company with marketing intelligence and automation.

How have the acquisitions of AlgoLift and GameRefinery helped Vungle evolve beyond its ad network roots?

Seven years ago, Vungle had built a strong business around rewards and interstitials primarily for gaming on iOS and Android. It was a user acquisition and monetization solution. Now, we’re also helping the data and games teams and becoming part of the development, growth and measurement process.

What exactly did you get with the AlgoLift deal?

AlgoLift is a solution that was built to help navigate the privacy challenge. It doesn’t map one-to-one with user IDs or use fingerprinting methods, but rather creates a probability distribution of where a user could have come from and then associates that with bid recommendations to help developers pay the right price for a user.

And what about with GameRefinery?

Whereas AlgoLift speaks to the data team and helps them construct models of profitability, GameRefinery speaks to the games and product teams about what features to put into their apps that will drive the highest level of engagement from end users. Imagine having to operationalize a taxonomy based on 600 different features in an app. GameRefinery helps developers understand what’s hot in their niche so they can develop content that speaks to their users’ motivations.

Both products are contextual and personalized in nature.

How has Vungle been preparing for iOS 14?

We’ve been strengthening our contextual data enhanced by GameRefinery and AlgoLift, and we’re going deeper into more complex types of data to help advertisers find users, including player motivations, moods and style. This is going from being highly strategic to something that’s extremely tactical.

We’ve also been building creative technology to democratize creative outputs, including creative analytics and recommendations to scale our Creative Labs proposition in an environment where creative will be leveraged in a different way than it was pre-iOS 14. And we’re developing a probabilistic solution that doesn’t require a personal ID or fingerprinting, but instead maximizes ROAS by grouping efficient bidding capabilities.

And we’re building support for the AppTrackingTransparency framework and SKAdNetwork across our whole product suite, including reporting. We’re already running [SKAdNetwork] campaigns for a good percentage of our top advertisers.

MMPs have been on the cutting edge in terms of their response to the iOS 14 changes, and some of the most robust conversations I’ve had in recent months about the nuances around conversion values and the interplay with creative has been with MMPs. We will continue to work very closely with our MMP partners.

But I do think they need to have solutions that go beyond their traditional role as a crossing guard. Diversification is so critical. MMPs will need to become more focused on solving problems for marketers rather than pure attribution. They will become more like analytics providers and aggregators for their partners.

We also may see some new players emerge that are purpose built for this next wave.