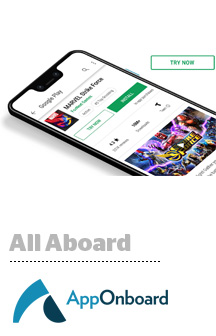 On Wednesday, the mobile app demo and analytics startup with a platform allows users to try an application before downloading it, announced its second funding round – $15 million – in less than eight months. AppOnboard’s Series A round in April totaled $15 million.

Although the latest infusion, led by The Breakaway Group, is officially AppOnboard’s Series B, the company considers it almost an extension of its recent Series A, which took place four months before it announced a partnership with Google to integrate its try-before-you-download technology directly into the Play Store.

The Google relationship created unexpected inbound interest from backers looking to invest in AppOnboard at a higher valuation than during its first funding round, and raising again so soon is all about keeping the momentum going, said Jonathan Zweig, AppOnboard’s CEO and co-founder.

Google’s experimentation with Instant Apps and on-demand app experiences are a bellwether for the future of app discoverability, which likely won’t revolve around app stores, or at least app stores as we know them today, said AppOnboard COO Bryan Buskas.

Developers spend a lot of money on user acquisition, burst campaigns, search ads and other engagement tactics to stand out in the app stores. But, according to Google, more than half of people find out about new apps through word of mouth.

“That calls into question whether app stores will be the primary place to go to find apps in the future,” Buskas said.

If that’s the case, there’s no reason why apps shouldn’t be easily shareable or why users should be forced to download an app in its entirety before getting the full experience, particularly in new and emerging markets where data is expensive and phones have limited storage capabilities.

There’s been rapid adoption of demo tech in India and Brazil, for example, where people will nearly always opt to try an app before downloading it if given the opportunity, Buskas said.

AppOnboard, which has its headquarters in Los Angeles and a small outpost in London, will spend the bulk of its new money on international expansion into APAC with an eye on China and Korea. Headcount grew from 30 to 80 this year, with plans to keep growing at the same clip into 2019.

The company will also invest in striking new partnerships with large ad networks so that its pre-install app demos can be bought and sold programmatically.

Although most ad networks find it relatively easy to support web-based rewarded HTML5 playables, for example, which is where the industry has focused most of its attention over the last couple of years, “full fidelity” demos aim to provide a richer experience, so publishers need to use an SDK to access AppOnboard’s supply.

That’s a harder sell, but it provides pubs and users with access to a more high-end unit.

“Our goal is to enable these demos that developers are producing to be used anywhere,” Buskas said, “not just in the stores, but on any other channel and with any other partner.”