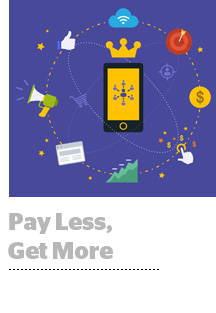 A growth marketer who works with five or fewer media sources pays an average of $3.58 per install, according to a report released Wednesday by mobile marketing analytics company Singular. But upping the number of media sources from five to six or more actually lowers the CPI to around $2.24.

In other words, when marketers scale their ad network partnerships, they get 60% more conversions and spend 37% less than marketers who are more conservative with their UA strategies.

“In marketing as in all else, reward comes only with risk,” said John Koetsier, Singular’s VP of insights. “It’s easy to limit media sources, but the best mobile marketers use dozens and sometimes even hundreds of ad partners to find the best conversions at the lowest prices.”

With the rise of ad mediation networks that optimize for serving impressions to the highest bids and the shift toward unified auctions, it’s no longer necessary to use multiple SDKs for inventory access, but it’s still really important for apps to diversify channel coverage. Novice advertisers that saturate a single channel “will [just] end up bidding against themselves,” said Eric Seufert, head of platform at San Francisco-based game developer N3twork.

“Testing is definitely a pain point, and it always will be,” he said. “It’s up the platforms to make themselves as easy to use as possible so marketers with limited bandwidth can use them to grow their business. It’s got to be worth the return on effort for the marketer.”

The trick for marketers is to be judicious about what’s being tested and how. It’s easy to “get distracted by all of the knobs and dials at your disposal,” Keisner said, but optimization only makes sense after there are best practices in place. Take big swings before incremental tweaks and don’t “overengineer things,” he said.

“Leave the more nuanced, minor optimizations for later,” Keisner said. “Even the most sophisticated marketers can only test so many variables, so test the big ones first.”

Twitter, for example, used to advise advertisers to set up as many campaigns as possible – 200 or 300 in some cases – to try and figure out which specific segments to target. “But we’ve found over time that advertisers perform better when they take a top-down approach and instead ask something like, ‘What are the big things I want to learn?’” Keisner said.

Having established a baseline for testing partners and tactics, though, the best performance-focused marketers are open to experimentation, comfortable with failure and always ready to lather, rinse, repeat.

N3twork, for instance, uses an in-house tool called Draper that automates the production of video creative. N3twork creates 50 different videos a week, runs tests on each and every one and then puts a ton of budget behind the best-performing ones.

“If we don’t rotate creative aggressively, we’ll end up showing the same ads over and over again to our target audience,” Seufert said. “A lot of other companies that make games like ours face the same problem.”

Most marketers aren’t on that level with their creative yet, though. They spend a ton of time testing their ad network partners but underuse creative as a performance lever, despite the fact that good creative can drive results. The quality of creative is responsible for almost half (49%) of a brand’s sales lift, according to Nielsen, and 75% of brand impression, per Ipsos.

“Performance marketers are so data-driven and focused on driving action that creative can get overlooked,” Keisner said, “but it’s something that needs to be tested and considered, just as much as anything else.”