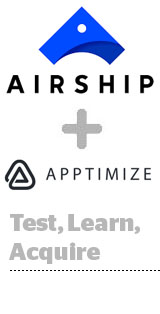 This is not a test: App messaging platform Airship is buying Apptimize, an A/B testing platform that helps mobile marketers rapidly run experiments across apps and sites, including OTT apps.

Airship, which rebranded from Urban Airship in April, declined to share terms for the deal, which was announced on Tuesday.

But around 20 people from Apptimize, which represents roughly two-thirds of the team, are joining Airship, which brings the company’s overall headcount to 330 employees.

This is Airship’s second acquisition in less than a year. In January, the company acquired its direct competitor in Europe, a mobile CRM and push startup called Accengage, to expand its global footprint.

Airship started life as a push notification provider in 2009, but the offering has evolved to new channels over the years, including website notifications, email, SMS and the mobile wallet.

The rationale for buying a testing platform is to give marketers the ability to iterate on and then deploy their digital engagement strategies from a single platform, said Brett Caine, Airship’s CEO.

Marketers know that always-on testing is the foundation of data-driven decision making, but a lot of companies don’t have a true test-and-learn culture in place, because it’s just hard to get started, Caine said, especially if marketers have to rely on their product managers or developers to get a test off the ground.

“When there are hurdles to getting a test done or if it’s going to take a long time to do it, marketers end up doing fewer tests and have to think long and hard before asking for access to what are probably scarce development resources,” Caine said.

Apptimize is designed to simplify the process of setting up and running tests using automation. Along with Airship, the technology can create a loop between delivering campaigns, tracking engagement and then sharing that information back to marketers to inform future testing.

“We see engagement and user testing as becoming synonymous and continuous,” Caine said.

For now, Apptimize will continue supporting existing customers and selling its platform on a stand-alone basis, while Airship’s roughly 1,500 clients will be able to access testing capabilities directly through Airship’s platform. Down the line, the two platforms will integrate more fully and Airship will develop a single user interface.

Airship was named as a leader in Gartner’s Magic Quadrant for mobile marketing platforms in July.