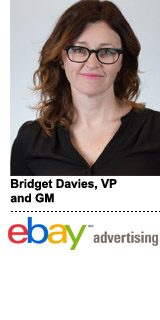 On May 10, eBay will part ways with its longtime ad rep firm, Triad Retail Media, which was acquired by Xaxis last October. Recode first reported the separation.

EBay will move its ad sales team in-house, claiming this migration will allow it to take more direct ownership of its brand partnerships.

“This is much more about our shift toward what we call first-party advertising and wanting to have direct relationships with brands,” Bridget Davies, VP and GM of eBay Advertising, told AdExchanger.

“When we go in and talk to a brand about how they should sell on eBay, it really is part of this bigger discussion and we thought it worked best for eBay to be at the table, not a third party.”

Contacted by AdExchanger, Triad responded in a written statement: “This decision was in no way related to Triad’s performance; it is an investment by Ebay to build partnerships that evolve its integrated marketing programs. This change only affects one of multiple divisions of the eBay business Triad currently supports.”

EBay plans to hire about 30 sales specialists – mostly client-facing sales roles – over the next few months to support its in-house efforts.

While it already has an in-house ad operations and analytics team, new sales roles will help eBay service new verticals – like brand manufacturers or CPGs.

“Despite [being] a $90 billion commerce platform, we haven’t had a lot of direct dialogue with brands,” Davies admitted.

Davies emphasized that eBay doesn’t compete with merchants because it doesn’t hold or sell merchandise directly.

“Our philosophy is to be very data-first, transparent with the partners and share a ton of insight back with brands to help them figure out what’s happening with their products in our ecosystem and how they can influence it,” she said.

EBay is also revamping its ad formats. The company will phase out Product Listing Ads (sort of what Amazon did with Sponsored Products) that link to third-party retail sites.

The goal is to maximize advertisers’ presences on eBay’s owned and operated properties through newer formats like promoted listings and (coming) sponsored brand product pages.

Scott Schenkel, eBay’s CFO, reiterated during Q4 earnings the company’s emphasis on “first-party” placements, which he called a “flywheel” for keeping consumers contained in the eBay ecosystem while opening new monetization potential for advertisers.

“You’ll see us continue to invest in more experiences over time, including opportunities within search results,” Davies said. “We’re [also] putting the weight of our marketing dollars behind [brand sponsorships] by leveraging social handles, offsite marketing and merchandising across eBay to drive traffic into the page a brand sponsored.”