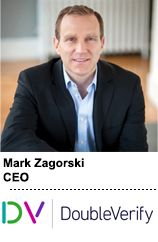 The CEO position at DoubleVerify opened up in early March, when its previous leader Wayne Gattinella resigned after The New York Post published a salacious article about his personal life. Laura Desmond served as interim CEO.

Zagorski has previous CEO experience at the data management platform eXelate, which he oversaw until it sold to Nielsen in 2015. He subsequently led the Nielsen Marketing Cloud until 2017. Zagorski was also CEO of the video and CTV ad tech platform Telaria from 2017 through 2019, until it merged with Rubicon Project (now Magnite). After the merger, he became president of Rubicon, but left that position and its board of directors last month, so he hasn’t been on the beach long.

DoubleVerify is in a very competitive category of ad verification and measurement providers, along with Integral Ad Science, Oracle Data Cloud’s Moat and White Ops. And as with other programmatic vendors, the focus in the past year has been on CTV and TV advertising.

In January, for instance, DoubleVerify introduced a CTV fraud and invalid traffic detection service for DSPs to certify programmatic ads that display on TV screens. Integral Ad Science launched its first CTV ad verification product a year ago: And Moat is going after Nielsen and Comscore with a cross-platform TV metric launched in May.

Zagorski’s experience in CTV and OTT will be “at the forefront” of DoubleVerify’s efforts right now, according to the release.

“There is a huge opportunity to continue to grow the business,” Zagorski said in the release. “And I am energized and excited to leverage my experience in CTV, data and analytics to make this happen.”