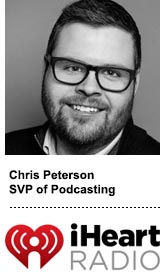 Radio giant iHeartMedia has had a big first year as a producer and distributor of podcasts – and it’s ready to go deeper into on-demand audio in 2018.

Since launching a dedicated podcast section in January, podcast listening has grown 60% on the iHeartRadio app. iHeartMedia is the second-largest podcast network ranked by measurement firm Podtrac, with more than 10,000 shows – 525 of which are produced in-house.

“2017 was [about] laying the foundation and proving the model, everything from product to working with our national talent,” said Chris Peterson, SVP of podcasting at iHeartMedia. “In 2018, you’re going to see a lot more original content from us.”

iHeartMedia has distribution deals with other podcast networks like NPR, Gimlet, WNYC, HowStuffWorks and Wondery. These deals let iHeart distribute its own shows to new audiences while exposing other publishers’ shows to its 100 million registered iHeartRadio listeners – and gain clout in a market that’s heating up.

“The space is new, so we want our content readily available wherever a user may be to grow our network,” Peterson said. “That’s the thought of most publishers right now.”

While iHeart ramps up on content, it’s exploring the best way to monetize. Programmatic inventory isn’t available yet, but that could change as advertiser demand scales.

“Our revenue playbook is adapting to each show,” Peterson said. “There’s not a one-size-fits-all right now.”

AdExchanger: Has your ability to measure podcast advertising improved since Apple opened listener data to publishers?

CHRIS PETERSON: We’re still not seeing that data from Apple. Right now, most of the podcast space is based on an archaic RSS feed. There’s just no way to tell what’s really happening.

Analytics are going to increase dollars, especially against other digital [mediums] where you know exactly where your money is going. The industry has to open up and advance the technology to where it already should be. There’s hesitancy from brands to jump in because of that.

You would probably hear from some people that the industry is fine because they’re making significantly more revenue than they ever have. We see a lot more potential. We need to give the brands everything they require, and I think that’s more data.

How are you monetizing podcasts and how will that change next year?

We take the podcast and create a media plan around it, extending buys on air and digital. We just launched a podcast with [men’s publisher] Fatherly focused on millennial dads. Verizon and Discovery sponsor that and also get streaming and display inventory across iHeartRadio.

When you have 500-plus podcasts, you can’t have one solution for all. We’re able to sell specific [sponsorships for] bigger shows, because that creates a better revenue opportunity. Local stations monetize [smaller shows with] the people already buying their station and morning show. That’s not to say we [won’t] do [programmatic] for some podcasts going into 2018.

Do you see an opportunity to create a private marketplace across your portfolio or do you need more scale?

You need a certain threshold of listening for brands to be interested. We need a solution that is scalable because we can’t have producers managing a schedule and baking in spots for 500 something podcasts. How that ends up netting out, we’re not sure today.

Will the shift to programmatic cause podcast CPMs plummet?

We know we need a dynamic solution, but we still want to use host-read endorsements so it still plays into what’s considered a successful podcast ad. We’re not trying to cheapen the marketplace by any means.

As competition heats up in the space, how long will this friendly  dynamic, where different players distribute different publisher’s podcasts, last?

That’s a hotly debated issue right now: Where do you want your content to live? You still want ownership. But my thought is, how do I convert the iHeartRadio listener into a podcast listener?

There’s always this overarching [question of], who is going to become the Netflix of podcasts? I think it’s too early to have this conversation when we’re not reaching enough of the population. The industry still has a long way to go before those things can be meaningful.