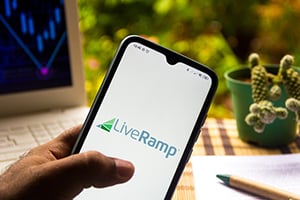 LiveRamp has locked in a deal to acquire Silicon Valley-based tech startup DataFleets for $68 million.

DataFleets has a cloud-based technology that allows businesses to securely merge and analyze data in a privacy-safe way. The acquisition is part of LiveRamp’s growing focus on data protection capabilities.

As part of the deal, which includes some assumed equity and additional retention incentives, LiveRamp will bring on the 11-member DataFleets team.

Using the DataFleets tech, LiveRamp will be able to open up new use cases and markets for distributed data collaboration through its Safe Haven platform, which launched last year. Safe Haven is a SaaS solution that facilitates secure data partnerships so that companies can mingle their data in a permission-based environment.

The DataFleets technology will be fully integrated with Safe Haven by September of this year.

Currently, first-, second- and third-party data often has to be moved to a central repository in order for companies to collaborate and share analytics, said Anneka Gupta, president and head of products and platforms at LiveRamp. DataFleets has technology that allows data to remain in separate silos.

“You can do analytics across all of those data sets,” Gupta told AdExchanger. “It’s very cutting edge and uses privacy-preserving algorithms coming out of academia and other corporate research programs.”

The DataFleets product suite unifies distributed data for collaboration and analytics without moving raw data beyond an enterprise’s firewall. The tools can be configured based on specific business needs. Its federated learning technology makes it possible to analyze data across borders and silos in fragmented architectures, as if they were all aggregated to one location.

Bringing DataFleets on board will serve as the foundation for LiveRamp’s platform and products going forward, Gupta said, and help make it “safe and easy for enterprises to use data wherever it lives.”

The deal will also support the expansion of LiveRamp’s offerings throughout Europe, APAC and Latin American this year, and open up new addressable industries, such as healthcare and financial services, where the data is highly regulated.

“There’s certainly a global aspect where there’s regulation and moving data across borders is becoming less possible because of the regulatory landscape,” Gupta said.

The idea with DataFleets is to allow any data scientist to collaborate safely and compliantly on confidential and private data, from healthcare records and financial transactions to marketing data.

Another potential use case LiveRamp is focused on is facilitating retail and CPG partnerships.

“Today, in order to enable that, we have to anonymize the transaction data and make that available to the CPG companies,” Gupta said. “In the future, instead of actually having to move the data, with DataFleets’ technology, CPG companies and retailers can keep their first-party data in their environments.”

DataFleets, she said, acts as the middleman in between that allows companies to do analytics and measurement without having to move the data.

DataFleets was founded in 2018 by David Gilmore and Nick Elledge. Last year, it raised $4.5 million in seed funding from investors such as Mark Cuban and Lightspeed Venture Partners to scale its platform. Forbes named it among the Top 20 cybersecurity startups to watch in 2021.