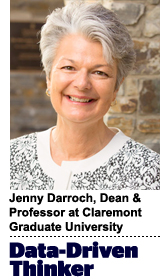 Today’s column is written by Jenny Darroch, dean and professor of marketing and entrepreneurship at the Peter F. Drucker and Masatoshi Ito Graduate Online School of Management, Claremont Graduate University.

In the wake of the Great Recession, it appeared that brick-and-mortar retail was all but over. Pundits used terms like “retail apocalypse” as weak consumer spending led to deep declines in sales, which were already lagging due to the rise of online shopping.

Even in today’s strong economy, household incomes are not keeping up with inflation, and consumers are spending their money on other priorities, such as education, healthcare and housing. Many established retailers continue to struggle in this environment. JCPenney, for instance, has seen declines in profits and store traffic. Sears is closing stores and filed for bankruptcy, months after it began thinning its marketing department.

But it’s not all doom and gloom, as some retail stores see growth. In August, Target reported its strongest same-store sales numbers in 13 years, and traffic to its stores rose 6.4% during the second quarter – the biggest increase since 2008. American Eagle Outfitters, Inc. has also had tremendous growth in the past year, gaining a solid 86.5%, compared to 29.87% industry growth.

So how have these retailers survived as others have languished? Much of their success stems from savvy digital marketing strategies.

How digital marketing has changed the game

Advancements in technology have enabled businesses to be more scientific in studying and predicting consumer behavior. Armed with this information, smart retailers continually fine-tune their marketing strategies in response to evolving customer needs and market conditions.

Their efforts are paying dividends for some retailers’ bottom lines. Target spends more than $1 billion a year on marketing and has become a magnet for attracting top digital marketing talent. The retailer says its ability to gather and utilize data has helped to fuel its success.

At the same time, Walmart has quietly been cultivating its digital advertising chops by connecting consumer behavior to in-store sales data, an area where Amazon is less competitive. Meanwhile, Macy’s is in the midst of a restructuring, funneling $550 million into digital, while cutting 10,000 employees.

Social media now ranks as consumers’ top online source of inspiration before making purchases, according to a 2018 PwC survey. The percentage of consumers who regularly buy on mobile devices this year reached 17%, which has more than doubled in the last five years and will soon surpass the 20% of shoppers who buy on PCs. And mcommerce sale predictions for 2019 are already set to surpass $693 billion.

Retail chains are responding by upping their social and mobile marketing spending. Macy’s created a digital ambassador program to connect with consumers through social media, and it recently partnered with branded video platform Tongal to produce content for Macy’s Instagram account.

Retailers are also optimizing ads for smartphones and offering location-based promotions to customers near their stores. With this approach, American Eagle Outfitters has driven more foot traffic to their outlets, resulting in a threefold increase in sales.

Smart retailers understand that after consumers decide to buy, they must receive their items quickly and conveniently. Online retailers have raised the bar here for the last two decades, but big-box stores are now catching up, especially given that 67% of shoppers buy online and pickup in-store. They have modernized their supply chains to allow shoppers to check inventory, view products in stores, buy in person or online and have purchases shipped to their homes.

By 2020, the demand for omnichannel customer experience will be amplified by the need for nearly perfect execution, according to PricewaterhouseCoopers.

Therefore, in this era of omnichannel retail, effective digital marketing strategies play a critical role in engaging consumers at every phase of the purchasing process. Businesses that adopt omnichannel strategies achieve 91% greater year-over-year customer retention compared to businesses that do not. Engagement keeps customers happy while boosting the retailer’s bottom line.

Creating shareable in-store experiences can also increase foot traffic. Target’s recent growth, for example, follows an investment of about $7 billion in revamping its ecommerce operations, remodeling existing locations and introducing smaller, neighborhood-based stores to create an improved experience for customers wherever they do their shopping.

Customers expect consistent interactions across channels, meaning that to be a strong omnichannel company, it is imperative to store data across channels, which aids with retargeting and contextual advertising to draw people back to a site for items they are already interested in.

Above all, retailers must use data to support evidence-based decision making and be willing to adapt to an ever-changing market.