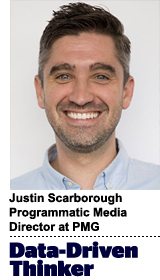 Banner ads have reigned over programmatic for years. Although demand-side platforms have been furiously expanding into emerging formats such as connected TV (CTV), digital out of home (DOOH) and digital audio, the reality is that before 2018, these formats were not much more than a novelty, with nowhere near as many supply sources or much demand to match it.

For example, prior to 2018, digital audio was largely only available programmatically on iHeartRadio and minimally on Spotify. Fast forward to this year and we’ve seen Pandora launch its programmatic offering and Spotify announced in its Q3 2018 earnings call that programmatic accounted for around a quarter of all revenue, growing twice as fast as direct-sold advertising. Similar stories can be found across the DOOH and CTV spaces.

This is such an important inflection point for the industry because when we finally combine the power of technology, automation and data, these emerging channels will be unrivaled in their ability to build brands, reach audiences and give buyers more control over ad placements.

For its first decade, programmatic was largely used as either a direct response, dynamic creative or pre-roll video strategy for reaching consumers. Now when buyers plan a campaign, they have the capability to include richer, broad media formats in more than just a testing capacity. The scale available today is vast, giving programmatic media enormous potential to provide both reach and impact.

2018 was the year buyers got wise to these opportunities, and as demand increases, we’re only going to see the amount of available inventory accelerate, similar to how the banner buying process evolved.

And we’re only at the tip of the iceberg. When people hear CTV, they think about services like Netflix and Hulu, but the reality is that CTV consumption has always been much broader. There’s a fair amount of short- and medium-form content that is consumed on CTVs, not to mention vast amounts of old and new on-demand network programming that has never been available extensively for real-time ad placement. Most of these placement opportunities have either been value-add digital video buys from network TV packages or were run through remnant ad networks.

2018 was the year this changed, and now you can literally have your pick of network, show and demo to target programmatically.

Banner ads will continue to hold relevance, as their implementation is straightforward, and they are extremely efficient when paired with the right technology. But the reality is that over time, as internet connectivity becomes more ubiquitous, whether you’re in your Wi-Fi-connected car or at home staring at your refrigerator’s screen, there’s more potential than ever to connect with consumers.

Since programmatic was born in the same pipes and has evolved with internet-delivered content, it will only increase its prevalence moving forward.