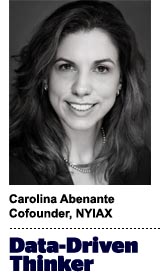 Today’s column is written by Carolina Abenante, co-founder of NYIAX.

The advertising industry is undergoing a paradigm shift, moving toward a model where audience data is currency. But with Google ending support of third-party cookies and casting doubt on industry initiatives like Unified ID 2.0, the ways in which that currency can be created and used remain unclear.

Data clean rooms, or spaces in which walled gardens share aggregated data that does not violate privacy requirements with advertisers, are particularly relevant in a cookieless world because brands have even more to address beyond the initial global privacy laws and data verification requirements that drove initial interest in them. Since Google ended its third party cookie policy, parties who grew dependent on them are now grappling with how to truly manage data, de-identify it and share it in new ways.

The key is to stop thinking of clean rooms as a workaround to save the status quo and to begin thinking of them as a tool for accomplishing new goals. Already, clean rooms are doing a lot around advanced analytics, attribution, and measurement because those capabilities don’t require high match rates.

What type of clean room should you use?

While data clean rooms aren’t new, distributed data clean rooms are new, and slightly different because the data does not live in one central location – eliminating the need to move data. For example, if one partner has their data in a Google Cloud project and the other partner has their data in Snowflake, those partners can securely collaborate without moving datasets. However, governance and security could be issues with distributed clean rooms due to challenges related to consistency, availability and partition ideals. Also, audience data isn’t evenly distributed, which makes for a bumpy period of adaptation.Weight these pros and cons when making your choices.

The clean rooms developed by walled gardens have a lot to offer, and the decade-plus of knowledge around best practice and media models tied to the cookie can in theory be rebuilt inside one of their clean rooms. However, it won’t be the same, and it will take time.

Google for instance claims its Federated Learning of Cohorts (FLoC) inside the Chrome privacy sandbox are 95 percent as effective as third-party cookies. The ad industry is skeptical. But with origin trials starting, we’ll soon have more clarity. To be clear, FLoCs aren’t strictly clean rooms – but they do hide consumers in a crowd by de-identifying data and clustering based on attributes.

And even the walled gardens must confront scale challenges, especially as consumers take up anti-tracking tools and restrict their permissions around tracking. Walled gardens may own consumer relationships at scale, but they’ll have to work hard to earn permissions at scale in order to achieve high match rates.

Beyond walled gardens, ad tech companies are scrambling to build data clean rooms. For advertisers and agencies, the mileage on those clean rooms will vary.

Advertisers with first-party data will get the most immediate benefit from clean rooms because they offer a privacy-compliant methodology for matching first-party data. That said, while some clean room technology platforms have integrated audience graphs for matching, others leave that piece of the puzzle to the advertisers and their partners to stitch together. In clean rooms that offer an audience graph, nothing leaves the clean room. These facts are important to know as successful targeting requires very large PII datasets to overcome low match rates.

But one bright spot for those advertisers without first-party data is the ability to use second-party ISP data. Consider Verizon Media’s new contextual targeting option. Instead of blacklisting content because of brand safety, Verizon Media’s second-party data offering allows brands to seek out desirable content, and within the context of a clean room, create audiences.

How close are we to using clean rooms for collaborative audience creation? At the moment, most clean rooms aren’t easy to use, unless you’re a data scientist. In time, tools will improve. But the industry also needs to become more sophisticated about using data as currency. The old model was about buying the highest match rates at the lowest prices. The new model is a pathway to creating and trading value. That’s an exciting evolution, but in order to get there, we need to meet complexity and uncertainty with innovation and collaboration.