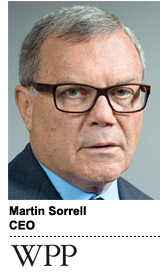 WPP confirmed Tuesday that its board has hired an independent counsel to investigate CEO Martin Sorrell for misuse of funds and allegations of inappropriate behavior. The Wall Street Journal first reported the news.

The advertising giant issued the following statement regarding the investigation:

“The Board of WPP has appointed independent counsel to conduct an investigation in response to an allegation of personal misconduct against Sir Martin Sorrell, Chief Executive Officer of WPP. The investigation is ongoing. The allegations do not involve amounts which are material to WPP.”

While the company's statement provides no detail about the alleged transgressions that triggered the probe, the investigation still comes as a shock given Sorrell's stature in the industry and his foundational role in the company he helms.

Sorrell has been CEO of WPP since its inception in 1986, when he purchased a small manufacturer called Wire & Plastic Products as the first step in his spin-up of a global advertising giant. Among other assets, its GroupM network is the largest media-buying entity in the world.

Sorrell, 73, is a bellwether of the advertising industry and one of its most outspoken leaders.  WPP has yet to name a successor for Sorrell, who has not said when he plans to retire.

The investigation comes as WPP and its holding company peers are facing headwinds in the market. In March, WPP reported 2017 was its worst financial year since the economic crisis in 2009, with net sales down almost 1% and reported revenues down 0.6% to $21.2 billion.

WPP predicted flat growth in 2018 and lowered growth projections from to 5% from 15% in March as clients continued to cut their marketing budgets and put pressure on agency margins.