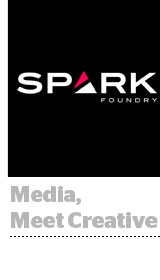 What if your media agency made your creative agency obsolete?

Spark Foundry, which formed this year when Publicis Media retired the Mediavest Spark brand, is blurring the line between media and creative to give its clients a better chance of success.

With the rise of sponsored content and social media, it makes sense for media and creative to work closely together. Creative can be tailored for the media environment in which it lives. Creative testing and optimization occurs with greater ease.

But many brands follow a TV playbook: big-budget, yearly shoots for 30-second spots that get chopped as an afterthought for digital distribution, leading to subpar performance. Creative agencies aren’t set up to incorporate feedback from the media side – and don’t have the budget to make changes anyway.

Spark Foundry is tasking its content team to select publishers to design a client’s sponsored content and social media posts. The agency makes sure the client’s creative brief matches the publisher-created advertising content.

Because the publishers that produce the content also distribute it, the bundled package goes for a better price. Plus, the publishers often work with influencers and produce social-media-friendly content that can be repurposed for other social media buys.

One of the Spark Foundry clients warming up to the approach is Kao, a challenger shampoo brand. Its John Frieda line has a loyal but aging customer base. And compared to the CPG giants it competes against, Kao’s marketing budget is tiny.

Kao’s ad creative usually centers around a single TV spot shot every year or two for all its global brands. “If you are a brand with an annual shoot, you don’t have any money to fix anything,” said Kao marketing director Heather Warnke. “You’ve used your budget. You can edit the content, but that’s it.”

Kao wanted a more flexible approach that would allow it to create more content customized for distribution outside of TV, where it could only command a tiny share of voice.

So, Kao pulled completely out of TV this year.

Kao pooled its creative and media budgets and partnered with iHeartRadio and Vox Media. Each publisher created dozens of John Frieda ad creative and distributed the assets across their respective properties.

“We are now producing 10 times more content at a lower budget,” Warnke said.

For example, iHeartRadio created native video and audio ads for John Frieda featuring up-and-coming singer Tinashe. It hired DJs to do live reads. While Kao had a single-percentage share of voice in the TV space, it exceeded a 90% share of voice on audio, with a campaign that spanned digital and terrestrial radio.

Vox Media created a series of videos featuring strong, bold women who embraced their natural curls or first gray hair. “We were so impressed with Vox for its ability to make that human connection through video,” Warnke said. “We are not sacrificing quality with this approach.” The content appeared on Vox’s sites and also on social media.

The early results are bearing fruit: Purchase intent for John Freida rose, and the content performs much better than before because it’s native and contextually relevant. “We launched three women [in Vox videos] the first week, and the engagement levels that week were greater than the whole previous year’s level of engagement,” Warnke said.

To achieve these results, Spark Foundry takes a more hands-on approach to sponsored content than other media agencies. Conde Nast, which works with Spark Foundry for several clients, notices that difference.

“The people we are negotiating with on the media side are at the creative shoot giving the client direction,” said Conde Nast Chief Business Officer Craig Kostelic, who heads up its Lifestyle Collection. “They understand the unit, and the distribution tactics, but they’re also sitting on the shoot giving real-time feedback on the things that ladder back up to their strategy.”

“Most of the time, no matter how many creative assets are being developed, you spend 90% of the time talking about the plumbing,” Kostelic said. “Just because we are using commoditized media dollars to do that storytelling doesn’t mean every conversation needs to turn into something metric-based.”

As publishers sell not just media, but their creative expertise, it makes sense for agencies to mirror that approach.

“The idea of a 30-second TV spot solving all your problems is dead,” said Eric Levin, EVP and chief content officer at Spark Foundry. He sees the agency’s setup as a solution to bloated creative budgets designed for an era where TV reigned.

Instead of spending $1 million on a single TV ad, clients should put that money toward dozens of ads customized for the media environments where they will be placed. Which is why the media agency needs to lead.

“We are thinking holistically about that what content consumers want and how they want to receive these messages,” Levin said. “At the end of the day, it’s far less interruptive.”

Based on the results it’s seen this year with Spark Foundry’s approach, Kao is continuing to pool its creative and media budgets.

Taking this approach does come with a notable downside, Warnke warned, but it’s one that Kao is glad to accept.

“You have more control if you do creative the traditional way. You know what the message is,” she said. But by giving up that control, it’s seeing better results. “We are not pushing the message at the consumer anymore. These publishers are experts in what content women on their site want to see and hear.”

“For a brand like ours that doesn’t have a large budget, this has been a game-changer,” Warnke said. “We know that our content will work its hardest, because we are testing it with publishers, and we have guaranteed distribution [through them]. It would be too hard for us as a smaller brand to create and distribute this on our own.”