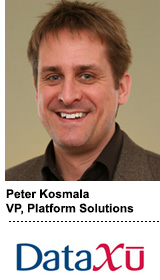 With Kosmala, who started in late July and will report to chief revenue officer Ed Montes, DataXu hopes to grow its self-serve business with agencies.

“This is about forging even stronger relationships with a channel that’s always been very important to DataXu,” Kosmala said. “A large percentage of our self-serve customers base are agencies.”

Kosmala will oversee a team that provides self-serve customers with technical support services. He hopes to make DataXu more visible in the agency market, particularly among independent agencies, some of which are still getting up to speed on programmatic.

“Some of these agencies are entering programmatic for the first time,” Kosmala said. “We’ve built a good presence, but it needs to be extended and those relationships [need to be] lengthened.”

Kosmala is well connected given that the 4As, where he was SVP of government relationships, is made up mostly of small to mid-size shops.

“That’s where a lot of growth and innovation is,” he said. “It’s a community I’m very familiar with.”

DataXu has a self-service narrative and sometimes wins business directly from brands. But as holding companies decentralize their trading desks and spread programmatic knowledge throughout the operating agencies, DataXu sees an opportunity to tap into a large market.

“Agencies in the last one to two years have finally embraced that they can add a valuable service and be compensated for it by operating platforms,” said Aaron Kechley, SVP of product management, marketing and technical solutions at DataXu. “The number of self-serve users in the agency world has grown a lot.”

The push for agency relationships doesn’t denote a shift in strategy for DataXu, Kechley said.

“It’s more an emphasis that that’s where growth seems to be coming from more so than the brands,” he said. “Our reputation is probably a little overemphasized as brand-direct.”

DataXu will still pursue business directly with brands but won’t go after business that competes with its agency partners.

“It’s our intention to not compete with agencies,” Kechley said. “Where a brand is using an agency, which is in the majority of the cases, we really want to work through the agency.”