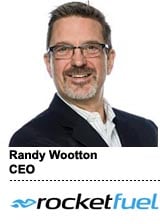 Faithful followers of Rocket Fuel’s saga will recall that the company hoped to get cash-flow positive in 2016 and return to growth sometime in 2017.

While CEO Randy Wootton declined to tell AdExchanger when exactly he expected that to happen, Rocket Fuel is banking on three things to bring it back: growth in its platform business, proliferation of its tech by working with more channel partners and more brand advertising spend, rather than the direct response that helped the company make its name.

Platform Solutions grew 70% in Q1, compared to the year before, and now constitutes 32% of total Q1 spend. Read the release.

Media services is still important for Rocket Fuel’s long-term growth however, Wootton said. Revenue in that sector declined and represented 71% of the company’s total revenue, compared to 84% during Q1 2016.

“There’s a viable business there,” Wootton told AdExchanger. “We’re focusing on the largest customers where we have a larger volume of dollars on a per-customer basis.”

In doing so, Rocket Fuel hopes to counter Media Service’s contraction with growth in Platform Solutions. Rocket Fuel’s relationships with holding companies will be important here.

“Some of the slowdown in media services business is [because] we don’t have the partnerships with all the holding companies,” Wootton told AdExchanger.

Some clients moved to holding companies where Rocket Fuel doesn’t have deep relationships, and so the vendor is susceptible to account migration.

In recent quarters, Wootton described the company’s attempt to secure contracts with some of the major holding companies. While he didn’t delve into the same level of detail this quarter, he did mention that revenue is up across all six holding companies.

“We have a couple of strong partnerships,” he said. “Spend across holding companies is up 10 times year over year.”

Finally, Rocket Fuel is hoping to drive a return to growth by helping advertisers reach brand objectives around GRP, reach and frequency – rather than just direct response. Wootton noted that Rocket Fuel already has a planning tool to facilitate branding goals and is creating new capabilities.

“Brand spend across our platform is up 50% year over year,” he said. This infusion represents “new pockets of money” that Rocket Fuel hadn’t considered in the past. (Rocket Fuel was also one of the vendors participating in Procter & Gamble’s recent DSP bakeoff.)

The company is also pushing a new metric, Non-GAAP Spend, as its platform business grows and the company tries to recognize net revenue instead of just gross revenue. Spend was $99.1 million, down 7% YoY.

“Historically, the difference [between Spend and GAAP revenue] has been nominal, but it will increase as we grow our platform solutions business,” said company CFO Stephen Snyder during the call.

He added that despite the revenue declines, Rocket Fuel’s ability to manage expenses and operational efficiencies kept it at the high end of last quarter’s guidance. Recall that Rocket Fuel had a series of layoffs earlier this year, and its current headcount is 751, compared to 917 in Q1 2016.

Going forward, look for incremental improvements as Rocket Fuel tries to right itself: “We are going through a multiyear transformation,” Snyder told investors.