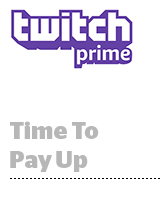 Twitch Prime, a subscription tier for power users of the Amazon video game streaming platform, will no longer include ad-free viewing beginning Oct. 14. It’s a rare move for Amazon to drop a benefit from Prime, which is all about jamming value into a single loyalty program. Amazon says the change is necessary to “strengthen and expand” the revenue opportunity for creators on Twitch, reports The Verge. More. Meanwhile Twitch is aggressively pursuing multimillion-dollar deals for exclusive live-streaming rights with top gamers (usually pulling them from YouTube) and CEO Emmett Shear set an ad revenue target of $1 billion, double its current rate, according to a Bloomberg report earlier this month.

Amazon’s $13.4 billion acquisition of Whole Foods last year heralded a boom market for ecommerce technology startups that could help brick-and-mortar businesses compete for online grocery dollars. Meal kit companies, same-day delivery specialists and ecommerce-only retailers are among the startups top retail chains have bought or invested in, many with critical advertiser relationships that could help staunch the flow of shopper marketing dollars to Amazon. One such startup, the online wholesale retailer Boxed, has been approached by many that “have wanted to kill us, partner with us, invest in us or buy us – all probably in the course of the same conversation,” co-founder and CEO Chieh Huang tells The New York Times. More.

Go By Your Gut

Google has been working on a new way to test ad creative … by setting up a fake brand. Using stock footage, Google created Doctor Fork, a fake pizza company it used to experiment on age-old advertising axioms, like whether brands should show someone chewing food or if audio and visual cues should be separated in an ad, TechCrunch reports. Nestle was the initial brand partner and Ryan Elder, associate professor of marketing at Brigham Young University, collaborated on the project. Operating a fake brand allows “a very different kind of freedom to be wrong,” said Ben Jones, creative director of the Google mobile video branding unit Unskippable Labs. More.

Facebook’s aspirations in the voice arena have been drowned out by Google Assistant, Amazon’s Alexa, Apple’s Siri and Microsoft’s Cortana. But the social media giant hasn’t given up on voice. TechCrunch’s Josh Constine examines Facebook’s speech interface, called Aloha, that supports its core app and Messenger. He also points to a smart speaker patent that Facebook filed in 2016. To be fair, there’s a huge difference between owning a patent and having a viable product. Read more.