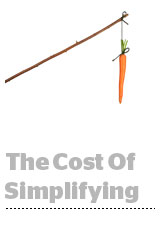 Among the trends the Association of National Advertisers (ANA) discovered in its 17th triennial study on agency compensation is that programmatic media buying has increased the popularity of commission-based fees. Commission-based models sharply declined from 1996 until 2010, when a mere 3% of survey respondents embraced them. Then they bounced back to 12% in 2016, which is still well-below the mid-’80s, when 80% of respondents paid on commission. So why is programmatic raising interest in commission-based payment? Mostly to streamline agency labor and technical costs, said David Beals, CEO of JLB + Partners and one of the survey’s contributors. “Because it is not purely labor,” he said, “some marketers are choosing to simplify compensation by using a commission method instead of negotiating the different labor and tech cost elements.” Read the ANA report.

In The Driver’s Seat

Facebook and Google drive the bulk of internet traffic, but they’re each heavier in certain areas. While Google drives the majority of business, tech and sports news traffic, Facebook is a firehose for lifestyle and entertainment news, according to research from digital analytics firm Parse.ly. For political news, Facebook tends to push people to national stories while Google drives more traffic to state and local stories. Though Google and Facebook are dictating the type of news people see, they only account for 14% of publisher revenue. The next tier of news referral sources includes Twitter, Yahoo, Drudge Report, Reddit, Pinterest, LinkedIn and StumbleUpon. More at Axios.

Google continued the unveiling of a string of ad product announcements and integrations Tuesday during the company's annual digital marketers conference in San Francisco. Among the most noteworthy is news that Google is expanding fast-loading Accelerated Mobile Pages (AMP) to search and display ads. An AdWords beta will use AMP for the landing pages of search ads, while ads served across the Google Display Network will also get a boost from AMP tech. Read the blog post.

“The potential for the change in people's lives because of telecom services, I think, is going to be more dramatic as we make this next leap than it's been ever before in the history of the business,” said Verizon CEO Lowell McAdam at a JPMorgan tech, media and telco conference this week. “We haven't even closed on Yahoo so give us a few minutes here,” McAdams told JPMorgan senior analyst Philip Cusick about long-term growth drivers. “But you see the potential of 1.3 billion users on a platform like AOL and Yahoo and you see the advertising potential and the content potential. There are some huge profit pools out there.”

The technology industry has created a breed of executive entrepreneurs who “sometimes (operate) at the edge of what a typical company would accept.” The Wall Street Journal details Anthony Levandowski, a former Google engineer poached by Uber who has embroiled the two companies in a legal dispute over ownership of prized self-driving car software. Google knew Levandowski invested in and ran self-driving auto startups, but “instead of reprimanding Mr. Levandowski for a potential conflict of interest, it ultimately bought (his startup) for about $20 million.” Levandowski started four companies while at Google: Two were purchased by Google and Uber bought the others. Ad tech in particular has ‘investorpreneurs’ who leverage their insider knowledge in side roles as angel investors. “Conflicts of interest are mostly relegated to hypotheticals.”