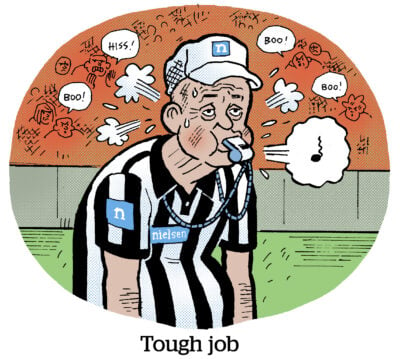 ONE Thing To Rule Them All

After a quiet stretch, Nielsen has new details on Nielsen ONE, its cross-device, cross-channel video rating product that began alpha tests last December.

But Nielsen ONE isn’t slated to be generally available until 2024, and alternate currency providers are moving quickly. (Challengers have the luxury of making bolder claims about their products, since they just need to get into testing consideration, whereas Nielsen ONE must hit the ground ready to go.)

Not to be forgotten, Nielsen is rolling out a few updates.

Most notable of the new features is outcome-based measurement. In addition to corralling audience insights at the campaign level, Nielsen ONE will also enable audiences from its ratings to be connected to purchases to close attribution loops.

The ONE alpha product is also adding “advanced audiences.” The release highlights an integration with audience segments from Polk Automotive Solutions (owned by S&P Global Mobility).

Apple has struck a major distribution deal with Major League Soccer to carry all the US pro soccer league’s games exclusively on Apple TV (though some will simulcast to linear TV as well, with Apple’s support), The Wall Street Journal reports.

The dollar amount was not disclosed, but it’s a mammoth deal for Apple, which becomes the global rightsholder – typically, sports broadcast rights are parceled off by market – and is now in position to grow in lockstep with the US soccer league. Not a bad bet.

US soccer fans are “the youngest, the most diverse, the most digitally native fans anywhere in the world,” boasted MLS Commissioner Don Garber.

Apple has nibbled at sports broadcasting before. For example, it has the rights to two Friday night Major League Baseball games per week. Streamers like snapping up sports rights because, unlike a hit show releasing a new season, viewers don’t subscribe for a week, binge the show, then ditch the subscription.

Buying the MLS rights is yet another sign that Apple is loosening its purse strings. And why not? It has more than $200 billion cash on hand. Apple recently announced that it’s using some of its cash reserves to offer Apple Pay users buy-now-pay-later services.

All Over The MAP

Sam’s Club was an early adopter of an ad-based business model, and its membership club – every customer is “logged-in,” so to speak, because they must have an account – gave the Walmart-owned company a head start.

It isn’t a huge change. The Sam’s Club platform approach is still similar to that of other retailers, particularly that of its parent company.

“What makes MAP unlike other retail ads businesses and membership & subscription platforms is this: as a membership organization, we have an incredible amount of insight on our members,” Josephs writes. Sam’s Club collects 100% of the purchase data – other retailers only connect to loyalty program shoppers or credit card data partnerships – and is focused on curation rather than growing a third-party marketplace or adding SKUs to increase ad rates.

“Therefore,” Josephs says, “we can predict what our members want and need with great precision.”

Facebook may change its algorithm to take on TikTok, leaked memos show. [The Verge]

Xaxis: How brands are investing in the new era of shopping. [blog]

Dentsu joins the agency rush to acquire Salesforce experts with its purchase of Pexlify. [The Drum]

Peach hires Emily Young as sales director for the UK and Ireland. [release]