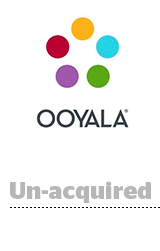 Ooyala’s management group has bought the company back from Telstra, the largest telco in Australia, which acquired the Silicon Valley OTT video technology startup in 2014. Telstra took more than $500 million in write-downs on the deal, acknowledging earlier this year that it had failed on the deal. The telco said it missed expectations because Ooyala’s advertising technology business didn’t take off, reports TV Technology. Telstra originally planned to IPO the startup, but shifts in the media and regulatory landscapes made that implausible. Some telcos are distancing themselves from their ad tech components, as with Sprint’s sale of its mobile ad unit, Pinsight Media, to InMobi, while others just flounder, like Norwegian telco Telenor, which took a write-down on cross-device tech vendor Tapad in 2016. It’s possible Ooyala, which has a strong business in video delivery and infrastructure, will improve its ad tech prospects as an independent company. It’s also actively exploring other acquisition opportunities, according to the news release.

Tools Of The Trades

The Advertising Research Foundation (ARF) has acquired the Coalition for Innovative Media Measurement (CIMM), a fellow industry trade group. ARF, founded in 1936, will incorporate CIMM’s work on cross-platform video measurement into its broader industry research initiatives. “The expertise, knowledge and advancements that have been made by CIMM in cross-platform measurement and granular TV measurement will significantly enhance the current efforts by the ARF to ensure that media measurement is keeping pace with an evolving industry,” says ARF President and CEO Scott McDonald. Read the release. Ad tech and media M&A has been reflected in activity among industry trade groups this year, with the ANA’s acquisition of DMA and the IAB Tech Lab taking over DigiTrust.

Facebook backtracked on its claim that Portal, the smart home video device it launched last week, will not collect data to target users with ads on Facebook. The platform reached out to Recode Wednesday to amend its original statement that Portal data, such as call log or app usage information, will not be used for ad targeting. While Facebook still isn’t clear if it will definitely use the data for targeting, Portal is built on the Messenger infrastructure and collects the same information as Messenger-enabled devices, so, technically, the data could be used for ads, according to a spokesperson. “I think [my colleague] was intending to say that we don’t intend to use it,” said Rafa Camargo, Facebook’s product VP in charge of Portal. “Potentially, it could be used.” More.

The cooking video company Tastemade raised $35 million Wednesday in its fifth round of funding. The company, known for its hands-in-pans cooking videos on Facebook and Instagram, will use the funds to grow its ad sales team and expand into new verticals, such as travel and home, The Wall Street Journal reports. Earlier this year, Tastemade launched a streaming channel with over 200 hours of original programming available as a standalone subscription or as part of a skinny bundle. For advertisers, Tastemade offers audience insights based on data from its video viewership. The publisher inked a deal with Subway this year to use its data to develop and market new sandwiches, for instance. “We’re creating original programming,” said co-founder and CEO Larry Fitzgibbon. “We’re testing out new ideas. We’re pushing them out to the audience and [in] real-time. And we’re providing insights based on that to our partner.” More.