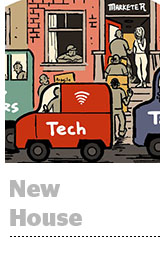 Consultancies are cashing in on in-housing. Firms like PwC, Accenture and Deloitte are using the media transparency debate to position themselves as in-housing experts, picking up marginal revenue – and helping brands cut out agencies in the process, reports Digiday. Because consulting firms have a heritage in systems integration, organization structure and strategic planning, they’re well positioned to help clients set up in-house data operations. “Unlike agencies, consultants are more used to one-off projects,” ANA SVP Bill Duggan told Digiday. “They [also] have their ear all the way up to the CEO or CFO, not just the CMO.”

French lawmakers and entrepreneurs are dealing with a double-edged sword. Investments in tech, data and AI – sometimes made explicitly to develop national business or technology – end up accruing to the Silicon Valley crew. French President Emmanuel Macron announced a series of new AI research hubs and investments, but Facebook is the biggest partner. A new tech visa program helps secure talent … but disproportionately for the biggest companies. Atos, the French IT services giant, recently picked Google as its AI development partner despite bitter local competition, Reuters reports. The same effect can be seen in the rollout of GDPR, which was crafted partially to balance the field of competition in Europe, but has already proven a relative boon to the likes of Google and Facebook.

Amazon is retiring its CPM Ads product this September, the company wrote Wednesday. The display ad network, which Amazon launched in 2014, allowed small publishers in the Amazon Associates network to run advertisements on Amazon sites in accordance with a CPM model. Amazon did not provide an explanation for the termination, but offered its Unified Ad Marketplace and Native Shopping Ads platforms as alternatives for publishers that qualify to use them. Amazon will issue its last payment on the CPM network on Sept. 30, and it will be removed from the company’s Associates Central hub on Dec. 31. TechCrunch has more.

Multitouch attribution (MTA) has had a tough year. Evidence has piled up that marketers aren’t being sold on the pricier benefits of MTA compared to good, ol’ fashioned last-click attribution. The big three original MTA providers – Visual IQ, Convertro and Adometry – have now disappeared within Nielsen, Verizon’s Oath (by way of AOL) and Google, respectively, and the independent market has been mostly hoovered up, too. “MTA was positioned as the ultimate attribution and marketing ROI measure at the customer level when in reality it was simply a better currency than last-touch attribution at the cookie level,” writes David Dixon, founder and CEO of Truesight Consultancy. When you promise the Holy Grail, people won’t be satisfied with a better-than-usual cup. More at MarTech Series.