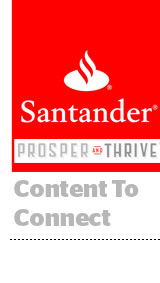 Santander Bank is using content marketing to become relevant to millennials, which is why it launched its Prosper and Thrive website – designed to provide financial guidance – last November.

Prosper and Thrive’s articles cover small decisions, like how much to spend on a wedding gift, as well as big ones, like tips for first-time home buyers.

“One of our hypotheses with Prosper and Thrive was that millennials are more interested in content that aligns with the financial challenges they are facing in their everyday lives, which can be small or big,” said Paul Pennelli, VP and director of digital advertising at Santander Bank.

To set the project up for success, Santander focused on two areas: measurement and distribution. The bank, along with its agency Arnold Worldwide, made sure it implemented tracking by launch and fully fleshed out a distribution plan spanning paid, owned and earned media.

The planning paid off: Since launch, Prosper and Thrive published 125 articles that drove 1 million site visits and generated 200,000 social engagements and 1,000 email sign-ups.

Though the campaign was designed to generate awareness, Santander tracked the number of incremental account opens that occurred due to its content marketing efforts. The bank saw 12 times the original customer acquisition activity it forecasted.

If Santander hadn’t implemented tracking and measurement from the start, it wouldn’t have been able to track the uptick in activity that occurred due to Prosper and Thrive.

“Having a measurement plan from the very beginning allows the marketer to be the storyteller and explain to the organization the impact content marketing is having on the business,” Pennelli said.

Being able to measure success was doubly important because the content marketing investment was completely new for Santander.

In the past, the bank focused on bottom-of-funnel, SEO-optimized articles designed to acquire customers, not top-of-funnel content. “We did not have a fully blown-out content marketing strategy that touched owned, earned and paid,” Pennelli said.

But for Prosper and Thrive, Santander knew that it needed to rely on all three of those channels in order to get eyeballs to its content.

“Distribution and amplification have been a huge part of the strategy since we started. We knew that discovery wasn’t going to come organically and overnight,” said Jess Newton, VP director of digital strategy at Arnold Worldwide.

Santander distributes the content through its owned channels as well, including via email and on its websites. Additionally, SEO optimization helps reach consumers seeking out content on personal finance.

Over the course of the campaign, Santander made two key findings that are shaping its future efforts to build Prosper and Thrive.

On the distribution side, its agency Arnold Worldwide discovered that it could boost performance by “marrying content strategy to audience strategy,” said Jess Newton, VP director of digital strategy at Arnold Worldwide.

Second, while Santander feared overemphasizing the bank in the articles would turn off consumers, analysis showed consumers felt otherwise.

“We went into this thinking we had to be extremely careful and strategic in limiting the number of times we reference a banking product on the site,” Pennelli said. “We’ve been surprised, though, at how engaged the audience has been with content that openly talks about a banking product in the context of [an article].”

Next year, Santander is continuing its investment in Prosper and Thrive. “We view content marketing as a tactic that can be a positive player for us in driving awareness,” Pennelli said.