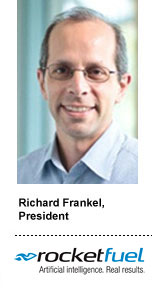 Compared to the U.S., Japan’s programmatic buying space is in its infancy. But to Rocket Fuel, this is the perfect time to stake a claim for its demand-side platform in that country, as the ad tech firm has been working on building a bigger global presence this year. But instead of just opening up its shop there and waiting for the programmatic market to catch up, Rocket Fuel has struck a strategic alliance with Dentsu digital marketing unit cyber communications inc.

“Although the concept of programmatic buying is still new in Japan, you have seen exchange players like OpenX expand their footprint there, so we feel this is the right moment to establish a leadership position,” said Richard Frankel, Rocket Fuel’s president and co-founder. “Over time, the opportunities around programmatic there are going to be tremendous. And the way to bring our technology to advertisers with the greatest efficiency and speed was to find a partner with the widest client base. By far, CCI is the largest digital player and their parent, Dentsu, is the largest ad agency in general. So that made obvious sense.”

Rocket Fuel’s entry into Japan comes a few months after it raised a whopping $50 million round, which brought its total venture capital investments to $76 million. Apart from using the proceeds to enhance its technology, the company has continued on a global expansion that began last year in Europe. This year, the Redwood City, CA-based company has opened offices in Germany, Holland as well as Canada.

With programmatic comprising a mere 2 percent of Japan’s total media buys, Frankel acknowledged that Japanese gains won’t significantly boost Rocket Fuel’s revenues in the near term. (Rocket Fuel says its compound annual growth rate exceeded 325 percent, and in 2011, the company grew revenue to $45 million as it achieved profitability.) But the connection with Dentsu through CCI could help it gain additional global brand clients.

“This week we’re having 200 CCI sales people being trained on how to sell programmatic buying,” Frankel said. “And they’ve been asking us to provide case studies showing how worldwide brands, particularly auto and packaged goods, are working with us and how they can apply that work in Japan. What we bring is our technology and CCI’s decision to partner with us is a validation of that. After all, there are native DSPs in Japan and certainly there’s a lot to choose from elsewhere. CCI’s stamp of approval will help us attract marketers rapidly.”

For the most part, Frankel expects the earliest adopters in the Japanese market will be the direct response players in travel, retail and finance, which is typical of most markets. Secondly, there’s a great deal of experimentation going on in Japan’s video ad space, especially in mobile video. Rocket Fuel plans to concentrate on developing that business heavily.

“Mobile RTB is functioning quite significantly both in the U.S. and Japan, though supply does far exceed the demand,” Frankel said. “The ad industry is still learning how to use that channel effectively. From Rocket Fuel’s perspective, all digital channels are similar. And we see our technology as a way for marketers to best employ mobile, social, video and display in general.”