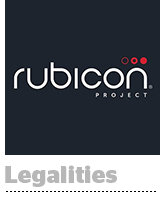 The Hand That Fees

Rubicon Project and the British news publisher The Guardian have reached a settlement in their legal disputes about alleged hidden fees, reports The Wall Street Journal. The suit, filed last year, alleged that the ad tech company charged undisclosed fees to buyers. Rubicon responded with a countersuit saying it was allowed to charge fees and The Guardian was aware of them. Rubicon will pay a confidential settlement that is “immaterial to the company from a financial standpoint,” according to the court filing in London. More. The outcome will (ironically) deprive the industry of some hoped for transparency into allegedly non-transparent SSP practices.

Digiday reports on some friction at Vodafone as the company attempts to take more of its media activities in house. The company manages its search and social campaigns directly, but still relies on agency Wavemaker for programmatic display. There are internal tensions between the digital team and advertising team over which will own and fund the programmatic setup, according to one Vodafone exec. “(The executive) pointed to the spiraling costs of ad tech, talent and publisher relationships as the key sticking point.” Vodafone CEO Vittorio Colao said in May that managing more of its $263 million digital media budgets will improve its own attribution and could give a better sense of whether it can build a viable ad business under GDPR using customer data. More.

Facebook shared an update Friday on the investigation into its recent data breach discovered in late September. The scale of the attack was a little less than previously thought – 30 million accounts affected rather than 50 million – but hackers accessed quite a lot of sensitive information. Fourteen million users had their names, contact info, gender, relationship status and recent place check-ins exposed, while another 15 million just had their names and contact details breached. For the remaining 1 million, it doesn’t appear that any information was taken. According to Facebook, the attack did not include advertising, developer accounts, third-party apps, Instagram, Messenger or any of its other apps. “People’s privacy and security are incredibly important, and we are sorry this happened,” Guy Rosen, Facebook’s VP of product management, told reporters. The FBI is still looking into the breach and asked Facebook not to discuss who might be behind it. CNBC has more.