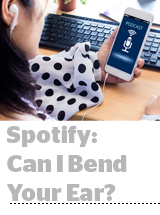 Amazon’s ad revenue growth rate is slowing, but neither investors nor ad partners are concerned. “Year-over-year growth rates are slowing in line with what you would expect for a maturing platform,” Kevin Packler, VP and director of Amazon Services at The Tombras Group, tells Digiday. Amazon is spinning out new ad formats and targeting and measurement features, and marketers are taking a more measured approach as they test the return on their Amazon ad spend. Brands are spending more efficiently on the platform, so revenue is moderating, says Eric Heller, EVP of marketplace services at Wunderman Thompson Commerce. “Amazon remains the honey dish on a table full of ants,” he says. More.

Spotify is overhauling its app to put podcasts front and center. The audio streaming service rolled out an app redesign that features music and podcast tabs at the top of user libraries, a key discovery booster for podcasts and an indicator of how important non-music audio could be for the platform. “There are plenty of podcasts we’d all enjoy if only we knew they existed,” Spotify CFO Barry McCarthy tells Bloomberg. “There is no search engine, no search interface that understands what podcast you and I like. We’re working hard on that problem.” Spotify has spent more than $400 million this year to buy podcast companies and create original programming for subscribers. The company, which pays millions to studios for music licensing fees, sees podcasting as a business where it can start early and take a larger share of the overall pie. More.

The number of billion-dollar direct-to-consumer startup deals doubled last week, when the CPG holding company Edgewell Personal Care bought Harry’s for $1.37 billion. Previously, Unilever’s 2016 acquisition of Dollar Shave Club for $1 billion was the only DTC deal to achieve that milestone. Edgewell already has brands like Schick and Edge in the men’s grooming category. But its sales dropped almost 9% year over year, while Harry’s more than doubled, The Wall Street Journal reports. Edgewell has 15% of the US razor market, according to Nielsen data, and Harry’s adds another 6%. More. Harry’s is also a strong example of how DTC brands can translate their social and programmatic roots into retail sales. In 2017, a year after launching in-stores kiosks at Target locations, Harry’s brick-and-mortar business had already reshaped its digital marketing program, because driving stores sales outperformed digital funnel metrics like free tests and new subscriber sign-ups.