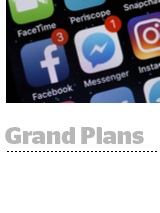 Facebook will integrate WhatsApp, Instagram and Messenger, uniting the world’s three largest messaging apps and 2.6 billion combined users, The New York Times reports. The services will remain standalone apps, but for the first time will share the same tech infrastructure. Though the plan could face privacy and antitrust blowback, especially considering CEO Mark Zuckerberg promised autonomy across Facebook’s portfolio after buying Instagram and WhatsApp. “This is why there should have been far more scrutiny during Facebook’s acquisitions of Instagram and WhatsApp, which now clearly seem like horizontal mergers that should have triggered antitrust scrutiny,” tweeted Rep. Ro Khanna, a Democrat from California. More.

It seems like every week a new telco or TV network throws its hat in the streaming ring. And next could be T-Mobile, which plans to launch a mobile, ad-supported network, Cheddar reports. T-Mobile’s service, which will run on MVPD technology licensed from Xumo, will be available through an app pre-installed on its phones. The strategy is reminiscent of Verizon’s now-defunct Go90 video hub, which fizzled into a $658 million write-down. “The cable industry is ripe for disruption but it’s hard to see how a phone-based TV service would be the most opportune way to do it,” says Walter Piecyk, telecoms analyst for BTIG. Content is a challenge as well. Original programming is too expensive and major studios are licensing fewer shows and movies because each has its own service. More.

Before its acquisition by AT&T, Time Warner ran a media and tech venture fund with stakes in companies like Mashable, Mic and Tremor Video. The fund had successful exits, like Maker Studios, which sold to Disney for $500 million, and ad tech startup Adaptly, acquired by Accenture.  But WarnerMedia, the TV and studio production business under AT&T, has sunsetted its investment arm, Digiday reports. “Time Warner [Investments] was one of the bigger players in the space and was actively investing for strategic purposes – and they were a smart player,” according to the founder of a startup in Time Warner’s portfolio. “It’s not good for the sector; not having them around means one less place for companies in the media companies looking for new capital.” More.

Spotify maintained strict control over the content available on its platform, until last September when it relaxed those rules to allow more music from independent artists. But any relaxation in oversight is an opportunity for ad and engagement fraud. Some Spotify accounts appear to have been hacked and used to rack up thousands of listens for songs, BBC reports. The songs are typically short, without lyrics, and are uploaded by nonexistent bands that disappear upon examination. “We take the artificial manipulation of streaming activity on our service extremely seriously,” says the company in a statement. “Spotify has multiple detection measures in place monitoring consumption on the service to detect, investigate and deal with such activity.” More.