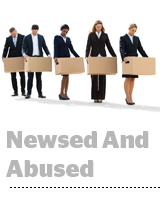 Down On Digital Media

It was a tough week for digital media. BuzzFeed said Thursday it would cut 15% of its workforce – roughly 250 people – as it struggles to meet revenue targets in a challenging market, The Wall Street Journal reports. More. And Verizon Media Group, formerly Oath, will cut about 800 employees – 7% of staff – while shuttering some of its less popular digital media assets, WSJ also reported. Neither of the layoffs are particularly surprising. BuzzFeed fired 100 people in 2017 and has fought to meet its aggressive revenue targets since, despite raising $500 million in funding. And in December, Verizon took a $4.6 billion write-down on Oath, which combined the digital media properties of AOL and Yahoo. More. Legacy news was also hit, with Gannett slashing newspaper teams across the country as part of a cost-cutting plan, and Condé Nast announcing paywalls for all of its titles. More at Adweek.

The Chinese government has blocked Microsoft’s Bing from running on the country’s censored internet, despite Microsoft’s censoring of search results in accordance with the government’s rules. It’s unclear whether the block is permanent, but it sends a clear signal to Western companies trying to access users in the world’s largest internet market, The New York Times reports. Blocking Bing also unravels Microsoft’s decade-long effort to crack the Chinese market with its Windows and cloud services. But it’s just another effort by China, which also banned WhatsApp and Instagram in recent years, to squash the influence of Western tech companies on its regulated web. More.

UK advertisers are redirecting Facebook budgets to addressable TV. Duracell pulled spend from Facebook in the United Kingdom because its video ads weren’t being seen. Other brands are fed up with the platform’s lack of attribution data, such as sales lift, recall and purchase intent, Digiday reports. Broadcasters, meanwhile, are beefing up their analytics. Sky TV now shares analytics with advertisers and introduced Moat verification for its set-top box audience. And as DTC marketers increase their TV spend, they’re looking for the campaign reporting and measurement they are accustomed to online. “TV advertisers are moving away from Facebook in relatively big numbers,” says a holding company exec. “They’re putting that money back into TV because it’s more regulated and is starting to establish a proposition around targeted ads.” More.