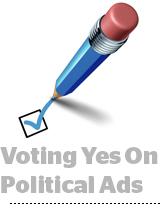 Political ads used to be seen as a huge opportunity for Facebook, but now they’re just a landmine. After finding itself at the center of Russian interference in the 2016 US election and facing similar issues abroad, Facebook debated internally whether to pull the plug on political ads, The Wall Street Journal reports. CEO Mark Zuckerberg made the final call to continue selling political ads, but the company will change its process. Facebook will stop offering commissions for political ad sales, and the platform has already moved most political ad buying to a self-serve system that its sales people support at a high level. That’s a sharp pivot from the in-depth assistance Facebook offered candidates in 2016, when Facebook employees closely advised campaigns and reportedly wrote Trump campaign ads. “It doesn’t matter if you’re running for president or running for city council,” says Katie Harbath, Facebook’s global elections public policy director. “You have access to the same tools and level of support.” More.

Condé Nast launched a new performance advertising product on Thursday geared toward retail and ecommerce brands, with affiliate links and product videos created by the publisher that drive traffic back to a product sales page. The new offering, called Prime Web, is built into Spire, Condé’s data and ad-targeting business, which requires a $20,000 minimum campaign commitment. But the publisher is also guaranteeing certain performance levels, and will give advertisers free impressions as a make-good if it doesn’t meet those goals. Think store visits or sales lift numbers, says Evan Adlman, SVP of enterprise sales. Condé has worked with Nielsen Catalina Solutions for a year and a half to attribute sales lift, but can also integrate with other retail measurement services, such as Placed or IRI. More.

Google announced a mobile search redesign this week. Google has steadily changed its ad visualization since 2013, mostly to make sponsored placements look more like organic ad listings. The redesign includes a couple of important updates, Search Engine Land reports. For one, ads will now have a black “Ad” label above the search result. Since Google started running sponsored search ads, it’s kept the advertisement labels below the listing. Another notable change will be the removal of the green font and shading Google has put on search ads since 2017. Organic listings are getting a facelift too, with more rich media options for the site publisher. “This update sets the stage for Google to continue to evolve the types of content it shows in the search results, including video, hi-res images, 3D objects and the types of actions it enables right from the search results.” More.