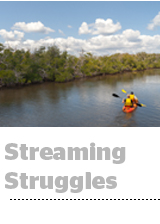 Streaming subscription fatigue may be setting in. That means marketing costs to acquire and retain new subscribers will go up and advertising models will remain under pressure. “Media companies and content owners … should not only continue to strengthen their content libraries, quality, distribution and value, but also keep a close eye on consumer frustrations, including advertising overload and data privacy concerns,” Kevin Westcott, leader of Deloitte’s telecom, media and entertainment practice, tells Adweek. Tiny moments of consumer friction can hurt growth. For instance, about two-fifths of streaming service users switch to a different service within a few minutes if they don’t see something to watch. And many viewers will abandon a streaming service entirely if it has as much as half the average ad load of a typical linear television program. More.

Amazon has been experimenting with video ads in its iOS app, and will do the same on Android later this year, according to Bloomberg. The ads are triggered by searches and presumably offer higher yield for Amazon and better performance for advertisers than static display. Amazon has set minimum budgets for the program at $35,000, according to an unnamed source, but it’s unclear from this write-up how prices are set.  More.

Meanwhile, being a third-party seller on Amazon isn’t getting any easier. The ecommerce giant is blocking ads from money-losing products in an attempt to prove to Wall Street it can generate profits, CNBC reports. In its most recent move, Amazon said money-losing vendors will have to make their products more financially viable to continue advertising on its site. Last month, Amazon closed all 87 of its pop-up stores and released a product that allows customers to have all orders shipped on the same day to reduce shipping costs. But this new initiative introduces bias into Amazon’s supposedly open ad platform, said Joe Hansen, CEO of Buy Box Experts. “Amazon is trying to be much more profitable than it was in the past,” he said. More.